We Have Tired of Violence: A True Story of Murder, Memory, and the Fight for Justice in Indonesia (Hardcover) 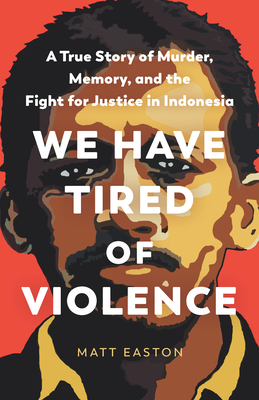 We Have Tired of Violence: A True Story of Murder, Memory, and the Fight for Justice in Indonesia (Hardcover)

Named a Best Book of the Year by The Economist

A chilling work of true crime about the midair murder of a human rights activist, set against a riveting political drama in the world's fourth-largest nation

On a warm Jakarta night in September 2004, Munir said goodbye to his wife and friends at the airport. He was bound for the Netherlands to pursue a master's degree in human rights. But Munir never reached Amsterdam alive. Before his plane touched down, the thirty-eight-year-old--one of the leading human rights activists of his generation--lay dead in the fourth row.

Munir's daring investigation of the killings and abductions that occurred over three decades of authoritarian rule by the former president, Suharto, had earned him powerful enemies. Undeterred, Munir's wife, Suciwati, and his close friend, Usman Hamid, launched their own investigation. They soon uncovered a conspiracy involving spies, a mysterious co-pilot, threats of violence and black magic, and deadly poison.

Drawing on interviews, courtroom observation, leaked documents, and police files, this book uncovers the dramatic murder plot and the titanic struggle to bring the perpetrators of Munir's death to justice. Just as Patrick Radden Keefe's Say Nothing did for Northern Ireland, We Have Tired of Violence tells the story of a shocking crime that serves as a window into a captivating land still struggling to shake off a terrible legacy.

Matt Easton is a writer and a human rights researcher and advocate. The author of We Have Tired of Violence: A True Story of Murder, Memory, and the Fight for Justice in Indonesia (The New Press), he has lived and worked in Indonesia, Timor-Leste, India, and Zimbabwe and now resides in New York.