Empire of Rubber: Firestone's Scramble for Land and Power in Liberia (Hardcover) 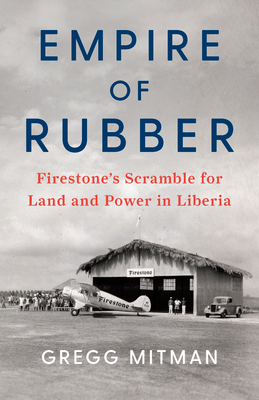 Empire of Rubber: Firestone's Scramble for Land and Power in Liberia (Hardcover)

An ambitious and shocking expos of America's hidden empire in Liberia, run by the storied Firestone corporation, and its long shadow

Historian and filmmaker Gregg Mitman scoured remote archives to unearth a history of promises unfulfilled for the vast numbers of Liberians who toiled on rubber plantations built on taken land. Mitman reveals a history of racial segregation and medical experimentation that reflected Jim Crow America--on African soil. As Firestone reaped fortunes, wealth and power concentrated in the hands of a few elites, fostering widespread inequalities that fed unrest, rebellions and, eventually, civil war.

A riveting narrative of ecology and disease, of commerce and science, and of racial politics and political maneuvering, Empire of Rubber uncovers the hidden story of a corporate empire whose tentacles reach into the present.

Gregg Mitman is the Vilas Research and William Coleman Professor of History, Medical History, and Environmental Studies at the University of Wisconsin-Madison. An award-winning author and filmmaker, his recent films and books include The Land Beneath Our Feet and Breathing Space: How Allergies Shape Our Lives and Landscapes. He lives near Madison, Wisconsin.