Hollywood in China: Behind the Scenes of the World's Largest Movie Market (Hardcover) 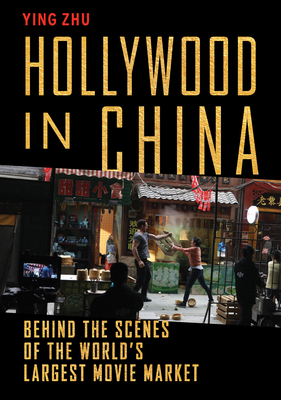 Hollywood in China: Behind the Scenes of the World's Largest Movie Market (Hardcover)

The inside story of the U.S.-Chinese superpower conflict playing out behind the scenes of today's movie industry, from the leading media scholar

China surpassed North America to become the world 's largest movie market in 2020. Formerly the focus of exotic fascination in the golden age of Hollywood, today the Chinese are a make-or-break audience for Hollywood's biggest blockbusters. And movies are now an essential part of China's global "soft power" strategy: a Chinese real estate tycoon, who until recently was the major shareholder of the AMC theater chain, built the world's largest film production facility. Behind the curtains, as this brilliant new book reveals, movies have become one of the biggest areas of competition between the world's two remaining superpowers.

Will Hollywood be eclipsed by its Chinese counterpart? No author is better positioned to untangle this riddle than Ying Zhu, a leading expert on Chinese film and media. In fascinating vignettes, Hollywood in China unravels the century-long relationship between Hollywood and China for the first time.

Blending cultural history, business, and international relations, Hollywood in China charts multiple power dynamics and teases out how competing political and economic interests as well as cultural values are manifested in the art and artifice of filmmaking on a global scale, and with global ramifications. The book is an inside look at the intense business and political maneuvering that is shaping the movies and the U.S.-China relationship itself--revealing a headlines-grabbing conflict that is playing out not only on the high seas, but on the silver screen.

Ying Zhu is professor emeritus at the City University of New York and director of the Center for Film and Moving Image Research in the Academy of Film, Hong Kong Baptist University. The recipient of a fellowship from the National Endowment for the Humanities, she is the author of four books including Two Billion Eyes: The Story of China Central Television and Hollywood in China: Behind the Scenes of the World's Largest Movie Market (both from The New Press) and co-editor of six books including Soft Power with Chinese Characteristics: China's Campaign for Hearts and Minds. She is the founder and chief editor of the peer-reviewed journal Global Storytelling: Journal of Digital and Moving Images. She resides in New York and Hong Kong.