Journeys in the Kali Yuga: A Pilgrimage from Esoteric India to Pagan Europe (Paperback) 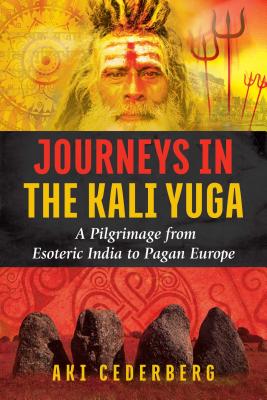 Journeys in the Kali Yuga: A Pilgrimage from Esoteric India to Pagan Europe (Paperback)

• Details the author’s encounters with the Naga Babas, his initiation into their tradition, and his experience at the Kumbh Mela, the largest spiritual gathering on Earth

• Shares the similarities he discovered between the teachings of the Indian tradition and the Western traditions of magic, alchemy, and pagan pantheons

• Introduces a wide cast of characters, including Goa Gil, the world-renowned guru of the Goa techno-trance scene, and Mahant Amar Bharti Ji, a “raised-arm Baba,” who for more than 40 years has held up one arm in devotion to Shiva

Beautifully detailing his spiritual pilgrimage from West to East and back again, in the age of strife known as the Kali Yuga, Aki Cederberg shares the authentic and unbroken magical traditions he experienced in India and Nepal and how his search for a spiritual homeland ultimately led him back to his native Europe.

Cederberg explains how his odyssey began as a search for spiritual roots, something missing in the spiritually disconnected life of the Western world, where the indigenous traditions were long ago severed by the spread of Christianity. Traveling to India, he encounters the ancient esoteric order of mystic, wild, naked holy men known as the Naga Babas, the living source of the Hindu traditions of magic and yoga. Immersing himself in the teachings of the tradition, he receives an initiation and partakes in the Kumbh Mela, the largest spiritual gathering on Earth. With his evocative descriptions, Cederberg shows how traveling in India can be an overwhelming, even psychedelic experience. Everything in this ancient land is multiplied and manifold: people and things, sights and sounds, joy and suffering. Yet beyond the apparent confusion and chaos, a strange, subtle order begins to reveal itself. He starts to glimpse resemblances and analogies between the teachings of the Indian tradition and the Western traditions of magic, alchemy, and pagan pantheons. He meets a wide cast of characters, from mystical hucksters in Rishikesh and the veritable army of naked, chillum-smoking mystics of Maya Devi to Goa Gil, the world-renowned guru of the Goa techno-trance scene, and Mahant Amar Bharti Ji, an urdhvabahu or “raised-arm Baba,” who for more than 40 years has held up one arm in devotion to Shiva.

After extensive traveling and immersing himself in the extraordinary world of India, Cederberg returns to his native soil of Europe. Traveling to holy places where old pagan divinities still linger in the shadows of the modern world, he dreams of forgotten gods and contemplates how they might be awakened yet again, reconnecting the West with its own pre-Christian spiritual traditions, sacred landscapes, and soul.
Aki Cederberg is a writer, musician, and filmmaker, who gives talks and lectures on esoteric topics. An extensive traveler, he has written for The Fenris Wolf book anthologies published in Sweden as well as several other publications. A member of several Finnish musical groups and a part of the podcast Radio Wyrd, he lives in Helsinki, Finland.
"In his rip-roaring English-language debut, Cederberg sets himself as neither guide nor guru, allowing readers to truly participate in his journey without worrying about what exactly they are supposed to learn."
— Publishers Weekly

“This book promises to be a pagan classic. It took rare initiations into the wonders and horrors of sacred India for Cederberg to recognize the same gods, under different names, stirring in his Nordic homeland. His pilgrimage will inspire anyone who seeks or glimpses these ‘beacons of spirit in a soulless age.’”
— Joscelyn Godwin, author of The Pagan Dream of the Renaissance

“Often one has to travel far afield to the farthest edge to find out where one belongs. Aki Cederberg tells us the fascinating tale of his journey to the wild heart of mythical India, a journey that changed his life and led him back to his roots.”
— Wolf-Dieter Storl, Ph.D., author of Shiva: The Wild God of Power and Ecstasy

“Cederberg has made the outer and inner journey from one end of the geography of tradition to the other, which is only an outer reflection of the inner journey many pilgrims make from the outer world to inner experience. What is remarkable about Cederberg’s journey is that he, like Odysseus of old, found his way home again. The knowledge he gathered on his journeys gave him the tools he needed to discover the inner treasures of his own homeland. By reading this book you can gather some of this knowledge without ever going to India.”
— Stephen E. Flowers, author of Original Magic

“Aki Cederberg is an outsider in the modern, spiritually barren West. His quest for a sense of spiritual place takes him to the exotic East. There he is an outsider as well but is allowed something close to an insider’s participation in a living pagan religious tradition. Instead of satisfaction, he finds only more yearning--for the largely forgotten traditions of his own people. Cederberg’s journey--which makes for a highly colorful, absorbing tale--functions as a kind of initiation into those traditions. It is a journey home.”
— Collin Cleary, author of What is a Rune? And Other Essays

“This book is as much a classical adventure story as it is a tale of genuine spiritual progress. Cederberg’s travels in search of the roots of pagan/religious culture and how they affect us is both a personal vision quest and a wider speculation. Every plant has its roots, and Cederberg is generous to share his own roots exploration in such an eloquent way. The book is inspiring, intelligent, and a truly great read.”
— Carl Abrahamsson, publisher and author of Occulture

“Unlike the congratulatory stories told by self-proclaimed gurus or superhero yoga masters, this is the spiritual autobiography of a guy like you or me who’s just trying to figure it all out in a world that has lost its way.”
— Joshua Buckley, editor of TYR: Myth, Culture & Tradition

“Ever since the Beatles, India has had its fair share of ‘spiritual’ tourists. Aki Cederberg is not one of them. The gurus and babas he described having encountered there obviously viewed him as a sincere spiritual pilgrim. His odyssey to the East seems best summed up in the lines of a poem by T. S. Eliot in Four Quartets: ‘And the end of all our exploring will be to arrive where we started and know the place for the first time.’”
— Robert N. Taylor, musician and author of Remnants of a Season

“Aki Cederberg’s Journeys in the Kali Yuga offers a visceral, gritty, and at times humorous account of the dreamlike world of Indian Naga Babas. A story of an ongoing search for something real in a world where the deepest concerns of human spirit have become mere commodities, this is a timely book about timeless topics.”
— Matti Rautaniemi, author and yoga historian

“Written in poetical prose that is sharp, witty, and honest, the book is a valuable offering to all seekers and pilgrims on the eternal search of self.”
— Yogananda Puri, Naga Sannyasi

“Whereas most Westerners drawn to Indian spirituality have an interest in yoga or meditation, it was his passion for magic that led Aki Cederberg to the Naga Babas. With a background within European pagan magic, he is particularly capable of appreciating the esoteric dimensions of the yoga tradition--dimensions largely shunned within modern Western yoga.”
— Christian Möllenhoff, founder of Yoga & Méditation Paris

"Aki Cederberg’s Journeys in the Kali Yuga is a unique addition to a very long and venerable tradition of travel writing by Westerners who have spent time in the East. This book is recommended for anyone who wants to know modern India, and still more to benefit from the experiences of a serious seeker on the path to a better understanding of himself and his genuine, rooted identity."
— John Morgan, New Dawn Magazine