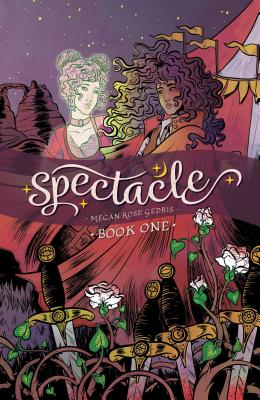 This is book number 1 in the Spectacle series.

Pragmatic engineer Anna works as a psychic in the Samson Brothers Circus, but she doesn't believe in anything supernatural—until her twin sister Kat is murdered and comes back as a very demanding ghost. Sharing a room with her sister was hard, but now they're sharing a body while trying to identify the killer. With few leads, a troupe full of secretive folk, and strange paranormal occurrences popping up around the circus, solving the case seems near impossible. But the murderer in their midst may be the least of their problems...

"Humorous and heartfelt, creepy and captivating; readers will eagerly hope for another volume." - Kirkus
Ro Salarian gave up their dream job of being a cheesemonger for their other dream job of making comics. They live in a probably haunted house in Chicago with their cat, Scrambles the Death Dealer.
"It’s Geek Love for a new generation, with lush and expressive art to boot."
— AV Club

"This graphic novel has a little bit for everyone: murder, mystery, a great setting of the circus, and quality artwork to enjoy."
— School Library Connection RECOMMENDED

"There’s a lot to love here, and fans of comics featuring diverse casts of characters or readers looking for mystery or paranormal comics will be delighted."
— BookList

"Spectacle stars an amazing cast of exciting characters alongside expressive panels and wonderful dialogue—oh, and it's also a freaking supernatural circus murder mystery! Which has just become my new favourite genre, thanks to Megan Rose Gedris."
— Sarah Graley, author of KIM REAPER