First Crossing: The 1919 Trans-Atlantic Flight of Alcock and Brown (Paperback) 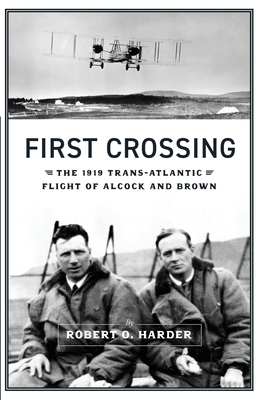 First Crossing: The 1919 Trans-Atlantic Flight of Alcock and Brown (Paperback)

The first to cross the Atlantic non-stop wasn't Charles Lindbergh, but two long-forgotten British airmen. This is their story.

Alcock & Brown's story unfolds on two levels-an action/adventure tale that reads more like fiction blended with a lay history of early technological breakthroughs that brought about the modern aviation age.

In First Crossing, we follow the two Royal Air Force officers from their separate upbringings in Manchester, England through terrifying Great War aerial combat. Both would be shot down and become prisoners of war. While incarcerated, both independently dreamed and schemed of a way to win Lord Northcliffe's 10,000 prize for the first non-stop Trans-Atlantic crossing.

At war's end, in an incredible moment of serendipity, they chanced to meet for the first time at Vickers Aviation near London and discovered their mutual interest in the race. Alcock needed an over-ocean navigator; Brown needed a pilot-what proved to be an ideal marriage. Through a combination of luck and their competitor's bad fortune, Alcock and Brown launched themselves into aviation immortality.