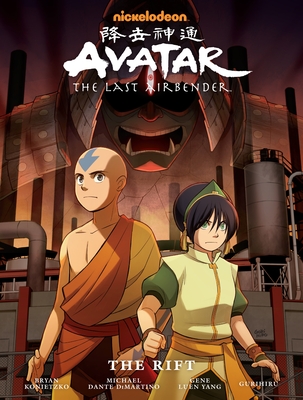 
Not On Our Shelves—Ships in 1-5 Days
Avatar Aang and friends honor an Air Nomad holiday that hasn't been celebrated in over one hundred years, but when cryptic visits from the spirit of Avatar Yangchen lead Aang to a refinery operating on land sacred to the Airbenders--they soon find themselves in peril as a dangerously powerful ancient spirit awakens with vengeance and destruction on its mind!

This collection of The Rift Parts 1-3 features annotations by Eisner Award-winning writer Gene Luen Yang (American Born Chinese) and artists Gurihiru (Thor and the Warriors Four), with a brand-new sketchbook section!
Gene Luen Yang began making comic books in the fifth grade. He has since written and drawn a number of titles. His 2006 book, American Born Chinese, was the first graphic novel to be nominated for a National Book Award and the first to win the American Library Association's Michael L. Printz Award. It also won an Eisner Award for Best Graphic Album - New. His 2013 two-volume graphic novel, Boxers & Saints, was nominated for both the National Book Award and the LA Times Book Award. Gene currently writes the graphic novel continuation of the popular Nickelodeon cartoon, Avatar: The Last Airbender. The Shadow Hero, his recent comic book series with Sonny Liew, revives the Green Turtle, an obscure 1940s character who is arguably the first Asian American superhero. The Shadow Hero is now available as individual digital issues via Amazon Kindle. The print trade paperback collection will be released on July 15, 2014. The author lives in San Francisco, CA..