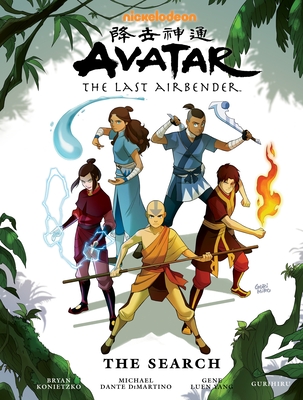 
Not On Our Shelves—Ships in 1-5 Days
The biggest mystery of Avatar—the fate of Fire Lord Zuko’s mother—is revealed in this remarkable oversized hardcover collecting parts 1–3 of The Search, from Airbender creators Michael Dante DiMartino and Bryan Konietzko! Featuring annotations by Eisner Award–winning writer Gene Luen Yang (American Born Chinese) and artistic team Gurihiru (Thorand the Warriors Four), and a brand-new sketchbook, this is a story that Avatar fans need in an edition they will love!

* The official continuation of Airbender from its creators and best-selling writer Gene Luen Yang!
* Collecting The Search Parts 1–3, with tons of extras!

“A wonderful reintroduction to the world of Aang and his merry band of benders.”—Nerdist
Gene Luen Yang began making comic books in the fifth grade. He has since written and drawn a number of titles. His 2006 book, American Born Chinese, was the first graphic novel to be nominated for a National Book Award and the first to win the American Library Association's Michael L. Printz Award. It also won an Eisner Award for Best Graphic Album—New. His 2013 two-volume graphic novel, Boxers & Saints, was nominated for both the National Book Award and the LA Times Book Award. Gene currently writes the graphic novel continuation of the popular Nickelodeon cartoon, Avatar: The Last Airbender. The Shadow Hero, his comic book series with Sonny Liew, revived the Green Turtle, an obscure 1940s character who is arguably the first Asian-American superhero. The Shadow Hero is now available as individual digital issues via Amazon Kindle.

Gurihiru is the team name of the illustration duo of Chifuku Sasaki and Naoko Kawano. Gurihuru has worked on Fantastic Four, The Last Airbender, and Power Pack. You can learn more about Gurihuru at gurihiru.com.