This Wheel's on Fire: Levon Helm and the Story of the Band (Paperback) 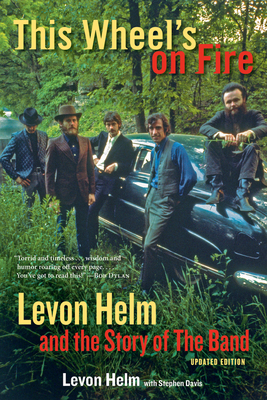 This Wheel's on Fire: Levon Helm and the Story of the Band (Paperback)

The singer and drummer of the Band details, in this book, the history of one of the most influential groups of the 1960s. While their music evoked a Southern mythology with their beautifully crafted, image-rich songs, only their Arkansan drummer, Levon Helm, was the genuine article. This updated edition of his life story includes a new epilogue that covers the last dozen years of his life. From the cotton fields to Woodstock and from seeing Sonny Boy Williamson and Elvis Presley to playing for President Clinton, This Wheel's on Fire replays the tumultuous life of Levon Helm in his own unforgettable folksy drawl.

Levon Helm met Ronnie Hawkins at the age of 17 and formed what would soon become the Band. He maintained a successful career as a singer and actor until his death in 2012. Stephen Davis is the author of numerous books, including Hammer of the Gods, Jim Morrison, More Room in a Broken Heart, Old Gods Almost Dead, and Walk This Way. He lives in Milton, Massachusetts.

"A must-read for anyone interested in Rock and Roll’s golden age."  —Williamsport Sun-Gazette

"This Wheel’s On Fire delivers Levon Helm unfiltered, at once feisty and welcoming to anyone who comes across his story. . . . It’s one hell of a story."  —PasteMagazine.com

“Levon Helm’s memoir has real wit and passion. His Southern-fried storytelling stands on its own, and it will make you dig out your vinyl to remember why you loved the Band’s music so much. . . . Helm’s tales from the road have real snap and humor; reading This Wheel’s on Fire, you almost don’t want that era to end.” —Boston Phoenix

“Helm lays it all bare in vivid, impassioned prose, adding an earthy, back-woods tone that makes the book read like a Southern novel, like Thomas Wolfe writing about rock ’n’ roll.” —Boston Globe

“One of the most insightful and intelligent rock bios in recent memory.” —Entertainment Weekly

“A soulful and passionate memoir. On every page Helm offers the reader folksy, straightforward wisdom gained from a lifetime of roadhouses, stadiums, and dancehalls. . . . This Wheel’s on Fire is reminiscent of Woody Guthrie’s Bound for Glory—both books are compelling and unforgettable personal narratives about the power of music to transcend even the most unmitigated circumstances. . . . Levon Helm doesn’t miss a beat.” —Houston Chronicle