The Eight of Swords: A Dr. Gideon Fell Mystery (Hardcover) 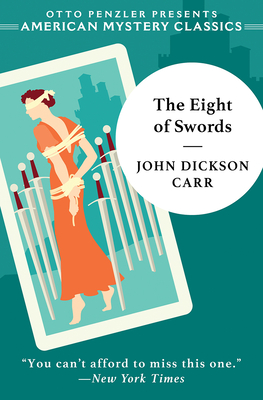 The Eight of Swords: A Dr. Gideon Fell Mystery (Hardcover)

A tarot card discovered at a murder scene provides a clue for Dr. Gideon Fell

In a house in the English countryside, a man has just turned up dead, surrounded by a crime scene that seems, at first glance, to be fairly straightforward. He’s found with a bullet through the head in an unlocked room, and all signs point to a recent strange visitor as the perpetrator. The body is even accompanied by an ostentatious clue, presumably left by the killer: The tarot card of The Eight of Swords, an allusion, perhaps, to justice.

But when Dr. Gideon Fell arrives at the house to investigate, he finds that certain aspects of the murder scene don’t quite add up—and that every new piece of evidence introduces a new problem instead of a new solution. Add to that the suggestion of a poltergeist on the property, the appearance of American gangsters, and the constant interruptions of two dabbling amateur sleuths adjacent to the case, and you have a situation puzzling enough to push Fell’s powers of deduction to their limits. But will Fell be able to cut through their distractions and get to the heart of the matter, before more murders take place?

Reissued for the first time in years, The Eight of Swords is an early Carr novel that highlights many of the qualities that made him such a successful writer, including his baffling plots, his twisty investigations, and his memorable characters. It is the third installment in the Dr. Gideon Fell series, which can be read in any order.

John Dickson Carr (1906-1977) was one of the greatest writers of the American Golden Age mystery, and one of the only American authors to be included in England’s legendary Detection Club. Though he was born and died in the United States, Carr began his writing career while living in England, where he remained for nearly twenty years. Under his own name and various pseudonyms, he wrote more than seventy novels and numerous short stories, and is best known today for his locked-room mysteries. His beloved series character, Dr. Gideon Fell, was based on author G. K. Chesterton and appeared in twenty-four novels.
You can't afford to miss this one.
— New York Times