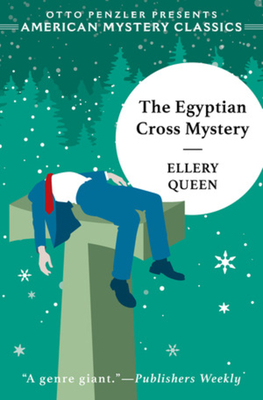 “Crucifixion on Christmas Day.” That’s what the newspapers report when a small-town schoolteacher is discovered dead, beheaded, and tied to a T-shaped cross on December 25th. It’s a murder bizarre enough to pique Ellery Queen’s interest — and intriguing enough to lure him to the West Virginia village where it occurred to take a closer look. But when he arrives, Queen is met with too few clues and too little evidence to produce a satisfactory verdict, even for a master sleuth such as himself, and so returns home to New York defeated.

The yuletide gore is a distant memory when the next such murder occurs, identical in every way, but now the location has moved to Long Island. When Ellery Queen learns that the sun-worshipping nudist cult he encountered down south has made the same relocation, it becomes clear that the group and the killings must be intertwined. But then several more crucifixion murders follow, drawing Queen deeper into a tangled and eerie puzzle unlike anything he’s encountered before. It will take all of his powers of deduction to uncover the killer.

Reissued for the first time in decades, The Egyptian Cross Mystery is a “fair play” puzzle in which the readers have all the clues necessary to solve the mystery themselves. It is the fifth of Ellery Queen’s cases, which may be enjoyed in any order.

Ellery Queen was a pen name created and shared by two cousins, Frederic Dannay (1905-1982) and Manfred B. Lee (1905-1971), as well as the name of their most famous detective. Born in Brooklyn, they spent forty-two years writing the greatest puzzle-mysteries of their time, gaining the duo a reputation as the foremost American authors of the Golden Age “fair play” mystery. Eventually famous on television and radio, Queen’s first appearance came in 1929 when the cousins won a mystery-writing contest with the book that would eventually be published as The Roman Hat Mystery. Besides co-writing the Queen novels, Dannay founded Ellery Queen’s Mystery Magazine, one of the most influential crime publications of all time. Although Dannay outlived his cousin by nine years, he retired the fictional Queen upon Lee’s death.
“A gumshoe with a headful of arcane knowledge.”
— Booklist