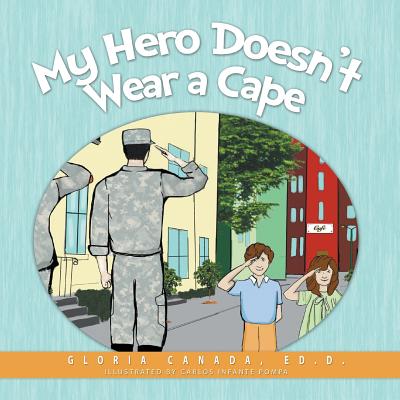 
Not On Our Shelves—Ships in 1-5 Days
(This book cannot be returned.)
ABOUT THE BOOK: My Hero Doesn't Wear a Cape captures the pride and admiration a young boy feels for his hero-his dad, the soldier. This book realistically depicts, through the eyes of a young boy, what it is like to have a parent serving in the military. He witnesses strangers who come up and shake his dad's hand, he views his dad marching in parades, he watches with the world as his father leaves for faraway places to help others in need, and he witnesses the strength of his mother. When his dad is home, the young boy describes the softer, gentler, human side of his real-life hero that only his family knows. My Hero Doesn't Wear a Cape truly touches on the unique experiences military families share. It is honest it its portrayal of how the families of military men and women also serve their country. Author royalties will be donated to charitable organizations who support US military veterans and their families. **** ABOUT THE AUTHOR: Gloria Canada grew up as one of four children in a military family. The pride, strength, and determination she witnessed in both her mother and father during their many moves and her father's deployment to Vietnam helped to create the strong commitment she has to the many challenges military families face. She has spent over thirty years in the field of education working as a teacher, principal, and consultant. She earned her doctorate from Texas A&M University. Gloria has two grown sons, Charles and Eric, and lives with her husband, Tom, and their dog, Chula, in San Antonio, Texas.