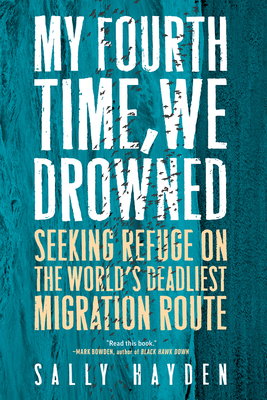 The Western world has turned its back on migrants, leaving them to cope with one of the most devastating humanitarian crises in history.

Reporter Sally Hayden was at home in London when she received a message on Facebook: “Hi sister Sally, we need your help.” The sender identified himself as an Eritrean refugee who had been held in a Libyan detention center for months, locked in one big hall with hundreds of others. Now, the city around them was crumbling in a scrimmage between warring factions, and they remained stuck, defenseless, with only one remaining hope: contacting her. Hayden had inadvertently stumbled onto a human rights disaster of epic proportions.

From this single message begins a staggering account of the migrant crisis across North Africa, in a groundbreaking work of investigative journalism. With unprecedented access to people currently inside Libyan detention centers, Hayden’s book is based on interviews with hundreds of refugees and migrants who tried to reach Europe and found themselves stuck in Libya once the EU started funding interceptions in 2017.

It is an intimate portrait of life for these detainees, as well as a condemnation of NGOs and the United Nations, whose abdication of international standards will echo throughout history. But most importantly, My Fourth Time, We Drowned shines a light on the resilience of humans: how refugees and migrants locked up for years fall in love, support each other through the hardest times, and carry out small acts of resistance in order to survive in a system that wants them to be silent and disappear.
Sally Hayden is an Irish journalist focused on migration, conﬂict, and humanitarian crises. She is currently the Africa correspondent for the Irish Times. Sally’s work on Libya has been featured by the New York Times, the Guardian, Channel 4 News, CNN International, Al Jazeera, TIME, BBC, Die ZEIT, Der Spiegel, the Sunday Times, the Telegraph, ITV News, and other outlets across the world. She has reported on other international stories for the Washington Post, the Financial Times Magazine, and the Thomson Reuters Foundation. In 2019, Sally was named as one of Forbes ’30 Under 30’ in Media in Europe, in part because of her work on refugee issues.
"A deeply researched and harrowing chronicle of the experiences of many refugees fleeing dictatorships, violence, persecution, and war. The book is the culmination of a one-woman fact-finding mission to uncover the myriad abuses faced by migrants hoping to make a better life for themselves in Europe." -- Foreign Policy

"I frantically underlined journalist Sally Hayden’s first book, My Fourth Time, We Drowned ... Readers should ... let Hayden’s vital reporting make them reconsider their view of what makes a moral world." —The Baffler

"My Fourth Time, We Drowned is journalism of the most urgent kind." —The Financial Times

"There is perhaps no better testament to the racist double standard at the core of European border policy than the accounts of refugees and migrants collected in. . . My Fourth Time, We Drowned." —The Intercept

"[A]stonishingly detailed... My Fourth Time, We Drowned is not simply a catalogue of misery: it is a meticulously documented record of the complicity of the very organizations that are meant to be forces of good." —The Times Literary Supplement

"The narrative is consistently harrowing, revealing the complexities within a global crisis that lacks an easy solution, especially as the numbers of refugees mount. An important contribution to the literature of forced immigration and humanitarian crisis." —Kirkus (Starred Review)

"A meticulous account of the horrifying North African refugee crisis . . . Painstaking details and a roundabout timeline make My Fourth Time, We Drowned informative, while the testimonies from the refugees themselves pulse with difficult truths that will shock (and maybe mobilize) conscientious citizens across the globe." —Foreword Reviews

"...a brilliant, unparalleled investigation of one of the most underreported scandals and monstrous crimes of our time." —Responsible Statecraft

"A wrenching account of what people will endure in search of a better life." - The Washington Independent Review of Books

"My Fourth Time, We Drowned is the most important work of contemporary reporting I have ever read. Every citizen of the European Union has not only a right, but also a responsibility, to learn about the realities described in this book. I hope that Sally Hayden's work can help to begin a radically new and overdue discussion about Europe's approach to migration and borders." —Sally Rooney, author of Beautiful World, Where Are You

"This book is a comprehensive indictment of the EU’s inhumane approach to the thousands of people that come to us seeking sanctuary. Her stories of the people trying to get here against the odds are gripping, shocking and heartbreaking. Sally Hayden's My Fourth Time, We Drowned is impossible to put down. It should make the plight of its protagonists impossible to ignore." —Ben Rawlence, author of City of Thorns

"One of the most important testaments of this awful time in life's history. It is both heartbreaking and stoic. I cry reading any page of it. Sally Hayden is a young and brilliant journalist." —Edna O'Brien, author of The Little Red Chairs

" 'I had stumbled on a human rights disaster of epic proportions,' writes Sally Hayden in the prologue of her remarkable story of the ongoing migrant crisis in Europe. Contacted blind, on the phone, by a desperate young man locked in a brutal refugee camp in Libya, Hayden embarked on a years-long effort to document the courage, humor, kindness, and resilience of ordinary people trapped by circumstance, and the tragic moral failure of the west to help them. The refugee who sent her the first Facebook message in 2018 had no way to know it, but he had reached exactly the right person. Read her book." —Mark Bowden, author of Black Hawk Down

"A must-read for all of us" —Andrea Elliott, author of Invisible Child

"My Fourth Time, We Drowned is a veritable masterclass in journalism. Unexpectedly finding herself a journalistic agony aunt for migrants being tortured, starved and raped inside horrific Libyan detention centres, Sally Hayden weaves together their WhatsApp and Facebook messages to produce the most riveting, detailed and damning account ever written on the deadliest of migration routes." —Christina Lamb author of The Sewing Circles of Herat: a Personal Voyage Through Afghanistan

"Irish journalist Sally Hayden describes one of the great tragedies of our era, the story of the thousands of refugees bent on starting new lives in the West, who instead spend years rotting in Sudanese refugee camps, trapped in Libyan prisons, clinging to sinking dinghies in the Mediterranean. Her harrowing portrait captures the voices of the Eritreans, Somalis, Ethiopians, Gambians and Sierra Leoneans caught up in this pitiless modern slave trade, who constantly remind us that the desire to better yourself is the most fundamental of human impulses. This is a remarkable and important book." —Michela Wrong, author of In the Footsteps of Mr. Kurtz

"This vivid chronicle of the lives and dreams of those who risk all to cross the Mediterranean to reach Europe, may make you cry, but it should make you angry. It is not just a blistering rebuke to those who torture, rape and imprison, but to the rest of us, who turn a blind eye." —Lindsey Hilsum, author of In Extremis: The Life and Death of the War Correspondent Marie Colvin

"Sally Hayden's heart-stopping account of the plight of contemporary refugees is both a compelling epic and an intimate encounter with exact personal experience. She achieves what all great writing hopes to do—the restoration of humanity to those who have been deprived of it. This is a vital book for anyone who wants to feel what it means to be human in the 21st century." —Fintan O'Toole, author of The Politics of Pain

"Kafka retold by an Irishwoman in Africa. Read this great book shedding light on a monstrous crime." —John Sweeney, host of Hunting Ghislaine with John Sweeney

"My Fourth Time, We Drowned is compassionate, brave, enraging, beautifully written and incredibly well-researched. Hayden exposes the truth about years of grotesque abuse committed against some of the world's most vulnerable people in all of our names. After this, none of us can say we didn't know." —Oliver Bullough, author of Moneyland

"This is a brilliant book, powerful and emotional—Sally Hayden is a superb journalist and through her incredible courage and eye witness testimonies, paints a compelling picture of the poignant and horrific lives endured by so many refugees and migrants. A must read for anyone with a conscience." —Miriam O'Callaghan, presenter for Prime Time (Ireland)