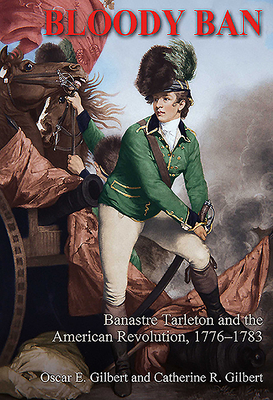 
Not Yet Published—Pre-Order Now
The Continentals had no doubt: Banastre Tarleton was the most barbaric and hated officer in America. Given his historical importance, surprisingly little has been written about the dashing cavalry leader. Oscar and Catherine Gilbert rectify this oversight with Bloody Ban: Banastre Tarleton and the American Revolution, 1776-1783, the first modern biography to appear in more than half a century.

Tarleton enjoyed a meteoric rise in rank and stature. He began the war at age 22 in 1776 as a cornet (lieutenant), and by 1781, the 26-year-old was a lieutenant colonel and leader of the feared Loyalist British Legion ("Tarleton's Raiders"), a combined arms brigade recruited in the northern colonies and sent south to terrorize and subdue its rebellious citizenry. Lord Cornwallis considered him his right-hand man, and entrusted Tarleton with the most difficult of missions.

The cavalryman came to fame early by capturing Gen. Charles Lee, second in rank only to George Washington. In early battles like Paoli (September 1777), Tarleton learned that surprise attacks and ruthless violence--18th century "shock and awe" tactics--resulted in victory. His transfer south to help "roll up" the rebels from South Carolina to Virginia triggered a brutal partisan war. Though his personal behavior proved impeccable, from his first notable skirmish at Monck's Corner (April 14, 1780) Tarleton failed to control the excesses of his favored Green Dragoons, including rape. At the Waxhaws (May 29, 1780), the Legion massacred surrendering Continentals and mutilated the wounded. "Tarleton's Quarter" became the byword of the rebel militia: No quarter asked or given. His reputation for invincibility was punctured at Blackstock's Farm (November 20, 1780), after which he lied to Cornwallis to conceal his defeat, and the ramifications of his tactical rashness at The Cowpens (January 17, 1781) played a major role in the eventual defeat of the British.

After the war Tarleton returned to Britain where, despite a scandalous personal life and massive gambling debts he parlayed his fame and royal connections into higher rank and a long career in Parliament. Nearly two centuries after his death the question remains: Was Banastre Tarleton the Revolution's finest cavalry leader, or a charlatan and war criminal?

The authors utilized period records and personal accounts to unravel the complex story (and debunk several myths) of Tarleton's extraordinary career. As Bloody Ban makes clear, the cavalryman possessed an exceedingly talented military mind, but was consumed by overweening ambition that clouded his judgments. His growing penchant for unprepared frontal assaults no matter the odds, and willingness to push his troops beyond the limits of endurance in his quest for glory, proved the bane of his career.

The smooth prose, exceptional research, and original maps make Bloody Ban: Banastre Tarleton and the American Revolution, 1776-1783 one of the most important books on the Revolutionary War.