Surveillance Valley: The Secret Military History of the Internet (Hardcover) 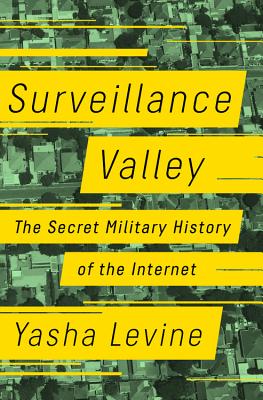 Surveillance Valley: The Secret Military History of the Internet (Hardcover)


Not On Our Shelves—Ships in 1-5 Days
The internet is the most effective weapon the government has ever built.

In this fascinating book, investigative reporter Yasha Levine uncovers the secret origins of the internet, tracing it back to a Pentagon counterinsurgency surveillance project.

A visionary intelligence officer, William Godel, realized that the key to winning the war in Vietnam was not outgunning the enemy, but using new information technology to understand their motives and anticipate their movements. This idea -- using computers to spy on people and groups perceived as a threat, both at home and abroad -- drove ARPA to develop the internet in the 1960s, and continues to be at the heart of the modern internet we all know and use today. As Levine shows, surveillance wasn't something that suddenly appeared on the internet; it was woven into the fabric of the technology.

But this isn't just a story about the NSA or other domestic programs run by the government. As the book spins forward in time, Levine examines the private surveillance business that powers tech-industry giants like Google, Facebook, and Amazon, revealing how these companies spy on their users for profit, all while doing double duty as military and intelligence contractors. Levine shows that the military and Silicon Valley are effectively inseparable: a military-digital complex that permeates everything connected to the internet, even coopting and weaponizing the antigovernment privacy movement that sprang up in the wake of Edward Snowden.

With deep research, skilled storytelling, and provocative arguments, Surveillance Valley will change the way you think about the news -- and the device on which you read it.
Yasha Levine is an investigative journalist for Pando Daily, a San Francisco-based news magazine focused on covering the politics and power of big tech. He has been published in Wired Magazine, the Nation, Slate, Penthouse, the New York Observer, Playboy, Not Safe For Work Corp, Alternet, and many others. He has also appeared on network television, including MSNBC, and has had his work profiled by the New York Observer, Vanity Fair, and the Verge, among others.
"A real public
service."—San Francisco Reviewof Books

"This polemical history argues that the U.S. military's role in
the development of the Internet indelibly shaped the system into
a powerful tool of government surveillance. ... amid increasing dismay about
technology's influence on contemporary life, such forceful questioning is
salutary."—New Yorker

"Provocative history of the internet-equipped security state,
implicating key players in the digital economy in the game of espionage....
Levine, a tech-savvy investigative journalist, documents an army of them in his
wide-ranging look at the way governments and companies alike spy on ordinary
citizens."—Kirkus

"This engrossing
investigation will find a large audience among those interested in the uses and
abuses of technology."—Library Journal

"Yasha Levine's bold and sweeping history of the Internet-from its
shadowy inception as a military contrivance for counterinsurgency and domestic
surveillance, to its current incarnation as a commercialized tool for everyday
communication that turns everyone's life into an open book-tells a gripping
story of our algorithmic way of life in the making. Defying common Internet
tropes that present a battle between valiant and independent rebels versus
omnipresent state and corporate powers, no one comes out of this book looking
clean. Whatever your thoughts about our digitized world, this book will
challenge them."—Stuart Ewen, Distinguished Professor of History, Sociology and MediaStudies at Hunter College and the CUNY Graduate Center

"The Internet will never be the same after you read Surveillance Valley. Yasha Levine has done a masterful job of research and reporting about the military origins of the 'world wide web' and how its essential nature has not changed in the years since its creation during the Cold War. I especially applaud his courage in unraveling the connections between the so-called 'deep state' and its economic allies in Silicon Valley with the big guns of the 'privacy' movement, who have scoffed at virtually every attempt at making their operations transparent to the public."—Tim Shorrock, author of Spies for Hire: The Secret World of IntelligenceOutsourcing

"In this fast-paced, myth busting expose, Yasha Levine documents how a collection of spooks, cybernetic fanatics, and libertarian oligarchs have exploited the internet to promote regime change abroad and establish a totalistic spying network at home. Surveillance Valley is an unprecedented journalistic achievement, revealing the untold history of the anti-democratic regime that rules our lives from behind a glossy LED screen."—Max Blumenthal, author of Goliath: Life and Loathingin Greater Israel, senioreditor of AlterNet's Grayzone Project

"Surveillance Valley is a troubling book, but it is an important book. It smashes comforting myths."—Boundary 2

"Google
employees rightfully balked recently when they found out their
employer had a number of defense contracts; one wonders if they knew that
the tech industry was quite literally founded on the back of the defense
industry, such that there was a time when they were synonymous. Yasha Levine's
wonderful historical tract shatters any illusion that the two industries were
ever really that at odds with each other."—Salon