Radical Abundance: How a Revolution in Nanotechnology Will Change Civilization (Hardcover) 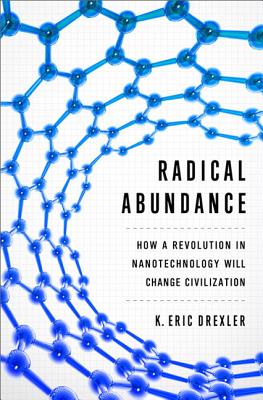 Radical Abundance: How a Revolution in Nanotechnology Will Change Civilization (Hardcover)


Not On Our Shelves—Ships in 1-5 Days
K. Eric Drexler is the founding father of nanotechnology -- the science of engineering on a molecular level. In Radical Abundance, he shows how rapid scientific progress is about to change our world. Thanks to atomically precise manufacturing, we will soon have the power to produce radically more of what people want, and at a lower cost. The result will shake the very foundations of our economy and environment.

Already, scientists have constructed prototypes for circuit boards built of millions of precisely arranged atoms. The advent of this kind of atomic precision promises to change the way we make things -- cleanly, inexpensively, and on a global scale. It allows us to imagine a world where solar arrays cost no more than cardboard and aluminum foil, and laptops cost about the same.

A provocative tour of cutting edge science and its implications by the field's founder and master, Radical Abundance offers a mind-expanding vision of a world hurtling toward an unexpected future.
K. Eric Drexler developed, named, and popularized the concept of nanotechnology. Currently at the Programme on the Impacts of Future Technology at Oxford University, Drexler is a frequent public speaker on scientific issues, addressing audiences of politicians, business leaders, scientists, and engineers in the Americas, Europe, and Asia.
Kirkus“A stimulating tour through current thinking about and future possibilities for nanotechnology, from one of its creators… A crackerjack piece of science and technology writing.”

Albany Times Union“K. Eric Drexler writes in his accessible new book "Radical Abundance" that the digital revolution is about to give way to a form of production that will radically transform the world economy and that could also save the environment: nanotechnology, or more specifically, atomically precise manufacturing.”

Nature Magazine“Nanotechnology pioneer Eric Drexler bids us to leap in at the technological deep end. We can transform the way we make everything from bridges to circuit boards, he argues, by harnessing molecular machines that operate on digital principles. The result? Desktop or garage facilities that use less fuel, land and energy than today’s vast factories and supply chains. The technical and political challenges of unleashing ‘atomically precise manufacturing’ are substantial, but Drexler cuts deftly through the complexities.”