'68: The Mexican Autumn of the Tlatelolco Massacre (Paperback) 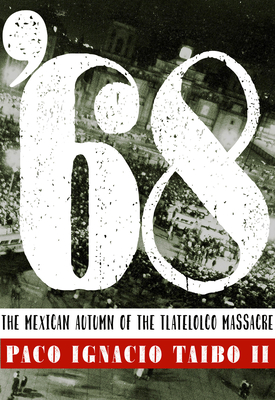 '68: The Mexican Autumn of the Tlatelolco Massacre (Paperback)


Special Order—Subject to Availability
In Mexico City on the night of October 2, 1968, at least two hundred students—among thousands protesting election fraud and campaigning for university reform—were shot dead in a bloody showdown with government troops in Tlatelolco Square. The bodies were collected and trucked away and the cobblestones washed clean. Hundreds more were arrested, and imprisoned for years. To this day, no one has been held accountable for the acts of savagery and these events are nowhere to be found in official histories. One member of the student movement that was crushed that night, Paco Taibo, would become an international literary figure. ’68is his account of the events of October 2, and of the student movement that preceded them. In provocative, anecdotal prose, Taibo claims for history “one more of the many unredeemed and sleepless ghosts that live in our lands.”
Paco Ignacio Taibo II, best known for his detective Héctor Belascoarán Shayne book series, is one of the foremost crime fiction writers in the Spanish-speaking world today. In 2019 he was named head of Mexico's Fondo de Cultura Económica, effectively a minister of literary culture. He is also the director of the acclaimed Semana Negra de Gijón, a literary festival in Spain. He is a tireless social activist, historian, and author of the best-selling biography of Ernesto “Che” Guevara, Guevara Also Known as Che. He has written more than forty books altogether, which have been published in twenty-eight countries. Some of his novels have been considered “Best Books of the Year” by the New York Times, Le Monde, and the Los Angeles Times. He has received several literary prizes, including the Premio Hammett for best crime fiction in Spain (three times), the 813 literary award for best foreign crime novel published in France, and the Premio Bancarella for the best book of the year in Italy.
Donald Nicholson-Smith has translated numerous works from the French and Spanish including Guy Debord’s The Society of the Spectacle and Raoul Vaneigem’s The Revolution of Everyday Life.
“Beautifully realized memoir of the Oct. 1968 Tlatelolco student massacre . . . [Taibo] evokes relationships, passions and arguments lovingly. . . [His] memoir goes a long way toward setting the record straight.” —Publishers Weekly