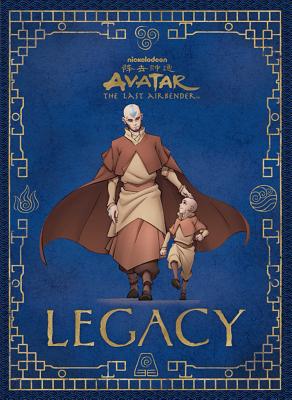 
Not On Our Shelves—Ships in 1-5 Days
Aang, the much-loved hero of Nickelodeon’s hit animated series Avatar: The Last Airbender, takes readers on an exciting and interactive journey through his thrilling world.

Earth. Air. Fire. Water. These are the four nations that lived in harmony until the Fire Nation attacked. For the next hundred years, war raged across the globe. It was believed that all inhabitants from the Air Nation had perished. Then, a girl and her brother discovered a twelve-year-old boy frozen in an iceberg. His name: Aang. He is the Avatar, the master of all four elements. Together Aang and his friends went on to save the world! Now a man, Aang looks back on these adventurous years—from being found in the ice to fighting epic battles to negotiating peace. This is Aang’s story, his mementos, and keepsakes. Avatar: The Last Airbender: Legacy is the collection that Aang passes down to his son Tenzin, who will one day be a master Airbender, too. Readers will relish Aang’s heroic tales and the posters, clippings, cards, and maps he gathered along the way! About the Insight Legends series Insight Legends is a collectible pop culture library featuring books that take an in-depth look at iconic characters and other elements from the worlds of comics, movies, television, and video games. Packed with amazing removable items that give the books an immersive, interactive feel, the series delivers unparalleled insight into the best-loved heroes and villains in modern fiction and the worlds they inhabit
Michael Teitelbaum is the author of more than 150 books, including tie-in novelizations based on movies and television shows as varied as Spider-Man, Superman, Avatar, Teenage Mutant Ninja Turtles, Smallville, X-Men, Batman, Transformers, Garfield, and Kermit the Frog.