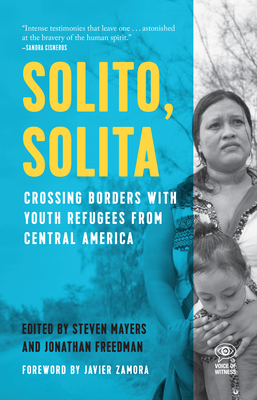 They are a mass migration of thousands, yet each one travels alone.

Solito, Solita (Alone, Alone), shortlisted for the 2019 Juan E. M ndez Book Award for Human Rights in Latin America, is an urgent collection of oral histories that tells--in their own words--the story of young refugees fleeing countries in Central America and traveling for hundreds of miles to seek safety and protection in the United States.

Fifteen narrators describe why they fled their homes, what happened on their dangerous journeys through Mexico, how they crossed the borders, and for some, their ongoing struggles to survive in the United States. In an era of fear, xenophobia, and outright lies, these stories amplify the compelling voices of migrant youth. What can they teach us about abuse and abandonment, bravery and resilience, hypocrisy and hope? They bring us into their hearts and onto streets filled with the lure of freedom and fraught with violence. From fending off kidnappers with knives and being locked in freezing holding cells to tearful reunions with parents, Solito, Solita's narrators bring to light the experiences of young people struggling for a better life across the border.

This collection includes the story of Adri n, from Guatemala City, whose mother was shot to death before his eyes. He refused to join a gang, rode across Mexico atop cargo trains, crossed the US border as a minor, and was handcuffed and thrown into ICE detention on his eighteenth birthday. We hear the story of Rosa, a Salvadoran mother fighting to save her life as well as her daughter's after death squads threatened her family. Together they trekked through the jungles on the border between Guatemala and Mexico, where masked men assaulted them. We also meet Gabriel, who after surviving sexual abuse starting at the age of eight fled to the United States, and through study, legal support and work, is now attending UC Berkeley.

Steven Mayers is a writer, oral historian, and professor at the City College of San Francisco. He has interviewed Central American migrants for over a decade. His master's thesis explored ways in which fiction can challenge historical accounts of the past, and his dissertation, analyzing the stories of Central American war refugees, focused on the themes of identity, home, and forgiveness. Jonathan Freedman is a Pulitzer Prize-winning journalist, author, and mentor with more than thirty years' experience reporting from Central America, Mexico, and the US border. His six-year series of investigative editorials for the San Diego Tribune was influential in the passage of the landmark 1986 US immigration reforms that authorized 2.7 million undocumented immigrants to become permanent legal residents.