Propaganda and the Public Mind (Paperback) 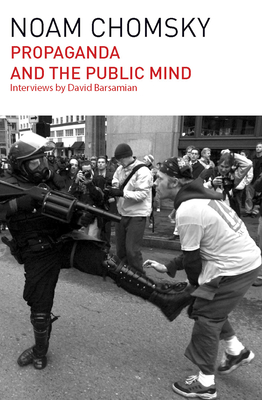 Propaganda and the Public Mind (Paperback)


Not On Our Shelves—Ships in 1-5 Days
Renowned interviewer David Barsamian showcases his unique access to Chomsky's thinking on a number of topics of contemporary and historical import. Chomsky offers insights into the institutions that shape the public mind in the service of power and profit. In an interview conducted after the important November 1999 "Battle in Seattle," Chomsky discusses prospects for building a movement to challenge corporate domination of the media, the environment, and even our private lives. Whether discussing U.S. military escalation in Colombia, attacks on Social Security, or growing inequality worldwide, Chomsky shows how ordinary people, if they work together, have the power to make meaningful change.

Noam Chomsky is Institute Professor in the Department of Linguistics and Philosophy at the Massachusetts Institute of Technology, Boston. A member of the American Academy of Science, he has published widely in both linguistics and current affairs. His books include At War with Asia, Towards a New Cold War, Fateful Triangle: The U. S., Israel and the Palestinians, Necessary Illusions, Hegemony or Survival, Deterring Democracy, Failed States: The Abuse of Power and the Assault on Democracy and Manufacturing Consent: The Political Economy of the Mass Media. David Barsamian is an Armenian-American radio broadcaster, writer, and the founder and director of Alternative Radio, the Boulder, Colorado-based syndicated weekly talk program heard on some 150 radio stations in various countries.