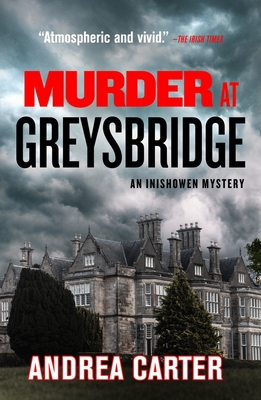 This is book number 4 in the An Inishowen Mystery series.

Being adapted for a television crime series

Summer has arrived in Inishowen and solicitor Benedicta (Ben) O'Keeffe is greatly tempted by a job offer from a law firm in America. Yet before making any life-changing decisions, there is her assistant Leah's wedding to attend at the newly restored Greysbridge Hotel—with its private beach and beautiful pier.

The perfect location—but the festivities are brutally cut short when a young American, a visitor also staying at the hotel, drowns in full view of the wedding guests. And when a second death is discovered the same evening, Ben finds herself embroiled in a real country-house-murder-mystery, where all the guests are suspects.

Sergeant Tom Molloy’s appearance to investigate throws Ben into turmoil, especially when the pursuit of two runaways leads the pair to an island off the Donegal coast, where a violent storm traps them together, completely cut off from the mainland.

A deadly conspiracy is unfolding on this tiny North Atlantic island—fueled by the ruthless pursuit of money—careening toward disaster for the inhabitants—and for Ben.

Death at Whitewater Church
Treacherous Strand
The Well of Ice
Murder at Greysbridge
The Body Falls
Andrea Carter grew up in the midlands of Ireland, studied law at Trinity College Dublin, and worked as a solicitor on the Inishowen Peninsula, County Donegal, where she ran the most northerly solicitor’s practice in the country. Following that, she moved to Dublin to practice as a barrister before turning to write crime novels. She holds an MFA in Creative Writing from University College Dublin.

Murder at Greysbridge is the fourth in the Inishowen Mystery Series. Carter’s first book, Death at Whitewater Church, a winner of the Irish Writers Centre Novel Fair, was followed by Treacherous Strand and The Well of Ice. She has been the recipient of two Arts Council of Ireland Literature Bursary Awards and a Dublin City Council Bursary Award. The series is being adapted for a television crime series to be titled “Donegal—The Inishowen Mysteries”. Andrea Carter lives in Dublin with her husband, documentary maker Geoff Power.
Praise for the Inishowen Mystery Series

“[Murder at Greysbridge] is truly a perfect choice for fans of character-driven mysteries set in thrilling surroundings . . . It has everything a reader could possibly want in a stellar piece of writing. Agatha Christie would be proud.” —Suspense Magazine

“Carter’s good-hearted characters and nice use of familiar country-house mystery motifs combine for an entertaining story. Fans of traditional puzzles and evocative settings will enjoy this.” —Publishers Weekly

“Carter weaves the colorful threads of this manor house mystery and its complex subplots into a metaphoric fine Irish kilt.” —Bookreporter

“With Death at Whitewater Church, Andrea Carter announces herself as one of the most exciting new voices in Irish crime fiction. A wonderfully written debut, the rugged beauty of Donegal provides a stunningly realized backdrop to the twists and turns of Ben's investigations.” —Brian McGilloway, New York Times best-selling author

“Andrea Carter writes brilliantly about a lively, entirely credible community where even your friends are suspects and your neighbors may end up dead. Everyone has a secret, and the revelations come thick and fast. Riveting, intriguing, and worryingly real.” —Liz Nugent, award-winning author