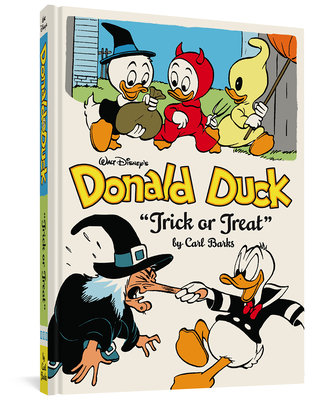 This is book number 13 in the The Complete Carl Barks Disney Library series.

This volume kicks off with “Trick or Treat" — a comic-book version of the classic Disney animated short, with nine pages restored — and includes Barks’s favorite, “Omelet,” where Donald Duck becomes…a chicken farmer?!

Our lead-off story, “Trick or Treat,” is the master cartoonist’s adaptation of the Donald Duck cartoon of the same name — with nine pages added back in from the originally truncated version! Then, Donald is convinced that Huey, Dewey, and Louie’s toy gun can really put people into a hypnotic spell — so he tries it out on Uncle Scrooge! Hijinks abound as Uncle Scrooge plants pots of gold at the foot of a rainbow to see who will handle the money best — Donald, Gladstone, or the nephews. Also, one of Barks’s own personal favorites, “Omelet” — the story of Donald’s slapstick misadventures as a chicken farmer. Nineteen stories, plus bonus features, each meticulously restored and newly colored. Insightful story notes by an international panel of Barks experts.

Carl Barks (1901-2000, b. Merrill, Oregon; d. Grants Pass, Oregon), one of the most brilliant cartoonists of the 20th century, entertained millions around the world with his timeless tales of Donald Duck and Barks’s most famous character creation, Uncle Scrooge. Over the course of his career, he wrote and drew more than 500 comics stories totaling more than 6,000 pages, most anonymously. He achieved international acclaim only after he semi-retired in 1968. Among many other honors, Barks was one of the three initial inductees into the Will Eisner Comic Awards Hall of Fame in 1987. (The other two were Jack Kirby and Will Eisner.) In 1991, Barks became the first Disney comic book artist to be recognized as a “Disney Legend,” a special award created by Disney “to acknowledge and honor the many individuals whose imagination, talents, and dreams have created the Disney magic.” He has been similarly honored in many other countries around the world.
Carl Barks... was probably the best artist and writer working in the
entire field of comics. ... Ingenious, clever, and funny, the Barks Duck
Books... are as readable and immediate to me as an adult as they were
when I first discovered them as a child.
— Jeff Smith (Bone, RASL) - Mental Floss