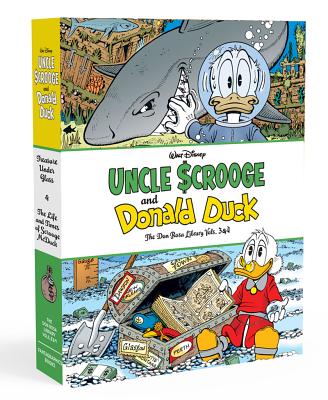 Available for the holidays is a stunning gift set containing Vol. 4 and last season’s Vol. 3: “Treasure Under Glass”!

When sharks and pirates block Scrooge McDuck from the mother of all treasure maps, only noisy nephew Donald can break the impasse ... or can he? It’s Fantagraphics’ third complete, chronological book of Duck epics by Don Rosa—following in the footsteps of Disney legend Carl Barks with his own stunning, seaworthy style!

In this fourth book of Duck epics by Don Rosa, Scroge's story begins to unfold. Relive Scrooge’s Scottish boyhood as “Last of the Clan McDuck,” then his teenage years as “Master of the Mississippi” on Uncle Pothole’s steamboat! Witness Scrooge’s first fights with the Beagle Boys and Flintheart Glomgold — and in a bonus “Chapter 0,” his earliest meeting with Magica De Spell!

Presented in brilliant color and with a treasure trove of Rosa’s cover art and behind-the-scenes factoids, these Duckburg epics are back in a definitive, comprehensive edition for posterity — at a bargain price worthy of Scrooge himself!

First active in comics as the indie creator of Captain Kentucky and The Pertwillaby Papers, Don Rosa (b. June 29, 1951) made his jump to official Scrooge sagas with the launch of Gladstone Publishing, the watershed 1980s publisher of fan-friendly Disney comics titles. Rosa later switched to producing Duckburg comics for the pan-European publisher Egmont, leading to his capturing a remarkable international fandom. He lives near Louisville, KY.