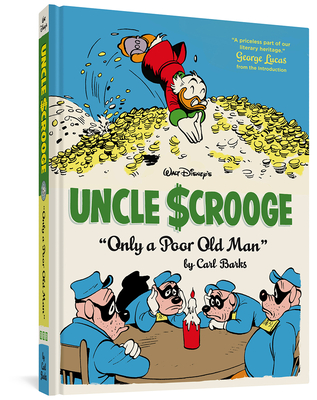 This is book number 12 in the The Complete Carl Barks Disney Library series.

Uncle Scrooge classics for all ages!

This volume starts off with “Only a Poor Old Man,” the defining Uncle Scrooge yarn (in fact his first big starring story) in which Scrooge’s plan to hide his money in a lake goes terribly wrong. Two other long-form classics in this volume include “Tralla La” (also known as “the bottlecap story,” in which Scrooge’s intrusion has terrible consequences for a money-less eden) and “Back to the Klondike”. Also in this volume are the full-length “The Secret of Atlantis,” and over two dozen more shorter stories and one-page gags.

Newly recolored in a version that combines the warm, friendly, slightly muted feeling of the beloved classic original comic books with state-of-the-art crispness and reproduction quality, the stories are joined by another volume’s worth of extensive “Liner Notes,” featuring fascinating behind-the-panels essays about the creation of the stories and analyses of their content from a world’s worth of Disney and Barks experts.