A Better Way to Bell a Cat (Hardcover) 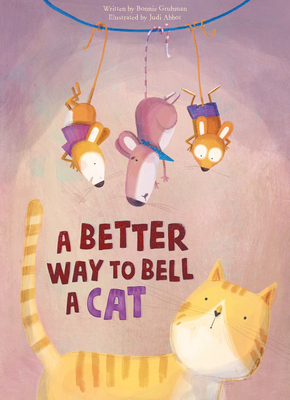 A Better Way to Bell a Cat (Hardcover)

"A familiar story told with a bit of pathos, ending with camaraderie and some suspense." - Kirkus Reviews

Elwood, Bernardo, and Vincent enjoy a nice, easy life. Until the humans bring home . . . MEOW Oh, no, a cat in the house Goodbye, lazy days. Unless the mice succeed in their plan, of course

A funny story about a new roommate and clever, scheming mice. For mouse and cat lovers ages 5 years and up.

Bonnie Grubman grew up with a love of reading. As a child, she lived in an apartment with her family, pet turtles, and a parakeet. On hot summer nights, she would cool off on the fire escape with a flashlight and a big stack of books. Bonnie went to nursing school, but later decided to trade her nurse's hat for a classroom full of picture books. She was inspired by her students who found joy and curiosity in everything they saw. Because of these kids, and for all kids, she became a writer. Bonnie lives in Syosset, New York.Judi Abbot was born and raised in Italy. She studied illustration at the art school in Milan. Now, she lives with her family in London. Judy usually works with acrylics, collage and color pencils, but she is also good with digital media. Next to her work as an illustrator, Judy organizes creative workshops for children in bookshops and in libraries.