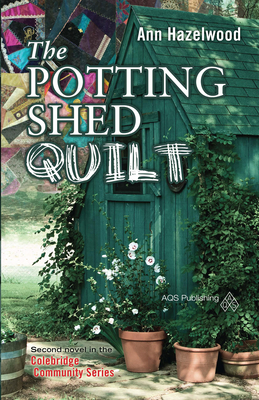 This is book number 2 in the Colebridge Communities series.

The second saga of Anne Brown and the Colebridge Community In The Basement Quilt, the debut novel by Ann Hazelwood, you got to know the family and friends of Anne Brown, a plucky florist whose daily ups and downs are as familiar as your own. In this follow-up book, Anne and her fianc , Sam, start house-hunting, or is that haunting? Once again, a quilt holds keys and clues to important family secrets, but whose family is it this time? And why would anyone hide a quilt in a potting shed? Life continues apace for Anne's family and friends, too. Share in their joys and sorrows as Colebridge goes about every community's business. The Potting Shed Quilt is not just the title of this sequel-the quilt itself is a character. You'll want to meet other quilt 'characters' throughout the series. Book 2 in the Colebridge Community Series.
Ann Hazelwood is a former shop owner and native of St. Charles Missouri. She's always adored quilting and is a certified quilt appraiser. She's the author of the wildly successful Colebridge Community series and considers writing one of her greatest passions. Titles include: Colebridge Community series - The Basement Quilt, The Potting Shed Quilt, The Funeral Parlor Quilt, The Jane Austen Quilt Club, The Ghostly Quilts on Main, Quilted Lilies, A Colebridge Quilted Christmas. She has also published the Wine Country Quilt Series, East Perry County series and is now writing the Door County Quilt series.