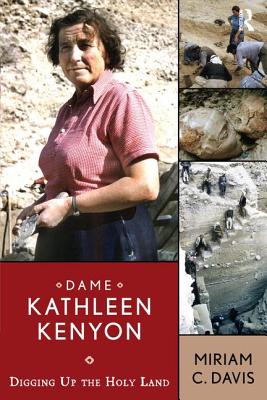 
Special Order—Subject to Availability
Dame Kathleen Kenyon has always been a larger-than-life figure, likely the most influential woman archaeologist of the 20th century. In the first full-length biography of Kenyon, Miriam Davis recounts not only her many achievements in the field but also her personal side, known to very few of her contemporaries. Her public side is a catalog of major successes: discovering the oldest city at Jericho with its amazing collection of plastered skulls; untangling the archaeological complexities of ancient Jerusalem and identifying the original City of David; participating in the discipline’s most famous all-woman excavation at Great Zimbabwe. Her development (with Sir Mortimer Wheeler) of stratigraphic trenching methods has been universally emulated by archaeologists for over half a century. Her private life—her childhood as daughter of the director of the British Museum, her accidental choice of a career in archaeology, her working at bombed sites in London during the blitz, and her solitary retirement to Wales—are generally unknown. Davis provides a balanced and illuminating picture of both the public Dame Kenyon and the private person.
Miriam Davis is Associate Professor of History at Delta State University in Mississippi. She has a Ph.D. in history from University of California Santa Barbara and has taught at Mississippi University for Women. In addition to her work on Kenyon, she is a specialist in health in Medieval England and has excavated in England, Scotland and the American Southeast.
"Miriam Davis has written a critical yet colorful biography of Dame Kathleen Kenyon, one of the legendary figures in the archaeology of the Holy Land. Drawing on extensive archival work and scores of personal interviews, she charts in detail Kenyon’s early struggle as a lonely woman in a man’s field; her extraordinary life on the digs she dominated at Samaria, Jericho, and Jerusalem; her frequent involvement in political intrigue in the Middle East; and her flamboyant personal style. As someone who knew Dame Kathleen well in Israel in the 1960s–1970s, I can attest that Davis has successfully captured the persona of this remarkable woman, with all her peculiarities, yet with full appreciation of her genius. A splendid accomplishment! As I read it, I could see Dame Kathleen in my mind’s eye. Davis has got it right." —William G. Dever, Professor Emeritus of Near Eastern Archaeology, University of Arizona

"As I worked with Dame Kathleen for many years and received my doctoral degree under her tutelage at The University of Oxford, it gives me much pleasure to note that Miriam Davis has done a terrific job describing not only 'K’s' archaeological career, but also the great influence she had upon her professional associates, students, and many friends, even though at heart she was a fairly shy person.This biography sheds much light on Dame Kathleen’s attempts to excel in ground breaking new archaeological techniques, which she honed while working with the legendary Sir Mortimer Wheeler on roman sites in the British Isles. This training allowed her to apply her knowledge to the excavation and study of foreign ancient sites in diverse locations that included southeast and North Africa, as well as the famous biblical sites at Samaria, Jericho, and Jerusalem, which produced many new and marvelous discoveries." —Thomas Holland, Oriental Institute, University of Chicago

"Kathleen Kenyon was the outstanding woman archaeologist of the twentieth century, famous for her excavations at Jericho and Jerusalem. In this penetrating biography of 'K', as she was known to friends, students and colleagues, Miriam Davis has written the definitive account of K's life of action and scholarship in England and the Middle East. Never shirking the difficulties, academic, political, personal, Davis offers balanced judgemets, drawing a portrait true to those of us who knew K and owed her so much. Essential reading for everyone interested in the development f archaeology as an modern intellectual quest as seen through the life of one of the pioneers." —Martin Biddle, Oxford

"Kathleen Kenyon died some 30 years ago. Her impact on the archaeological profession was immense. As time has passed, however, discussions of Kenyon and her impact have become almost one-dimensional caricatures, the gin-drinking delirious digger of precise, narrow stratigraphic trenches. This book reacquaints us with Kenyon as a person, something that is important in order to understand her work." —Jeffrey A. Blakely, University of Wisconsin

"Miriam Davis' book captures the full life of an extraordinary woman. In addition to describing K's career, it gathers detailed information and testimonials from those who knew her to form a colorful and insightful life story about an incredibly influential dame of archaeology. While Davis claims it is not intended to be an academic nor intellectual biography, the book nevertheless helps understand the environment of an archaeologist and how dedicating oneself to archaeology as a career means having it affect each aspect of their personal life...It shows what it takes to be a great archaeologist. To read the complete review, go to: http://www.archaeology.org/online/reviews/kenyon/" - Hana Koriech, Archaeology
The author of this biography deserves all praise. It is based on thorough research including both oral and written sources. It is quite readable and avoids many of the pitfalls common in such monographs. -Magen Broshi, Biblical Archaeology Review
All too often, academic biographies fail to strike a balance between detailing the personal life of the individual and explaining the intel­lectual context of their activities. Fortunately, Miriam Davis’ biography of Kathleen Kenyon is an exception… this reviewer finished the book with the satisfying sense of having been both educated and entertained. The book is an interesting mixture of the personal and the intellectual, with plenty to interest both archaeologists and others. -Naomi Farrington, Archaeological Review from Cambridge