World War II Memoirs: The Pacific Theater (LOA #351): With the Old Breed at Peleliu and Okinawa / Flights of Passage / Crossing the Line (Hardcover) 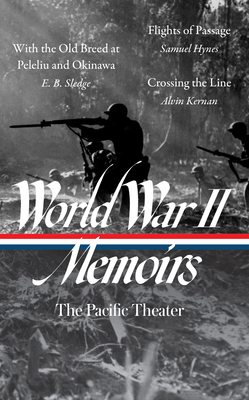 World War II Memoirs: The Pacific Theater (LOA #351): With the Old Breed at Peleliu and Okinawa / Flights of Passage / Crossing the Line (Hardcover)


In Stock—Click for Locations
In one volume, three unforgettable memoirs that capture the brutality, fear, and heroism of the American land, air, and sea war in the Pacific.


“Every generation is a secret society,” former Marine pilot Samuel Hynes wrote. “The secret that my generation—the one that came of age during the Second World War—shared was simply the war itself.” This volume brings together the powerful memoirs of three Americans who came of age fighting in the Pacific and who survived to tell their stories. Remarkable literary achievements that capture history with the immediacy of lived experience, all three—presented here in an illustrated collector’s edition—are classics of the modern literature of war.

In With the Old Breed at Peleliu and Okinawa (1981) Marine veteran E. B. Sledge bears unflinching witness to the horror, fear, and degradation of prolonged close-quarters combat. A mortarman serving in a front-line rifle company, Sledge survived thirty days of nightmarish fighting on the remote coral island of Peleliu, where heat, thirst, filth, and fear and hatred of the Japanese “eroded the veneer of civilization and made savages of us all.” On Okinawa he faced an even greater test of endurance amid deep mud, driving rain, and incessant shelling, as men “fought and bled in an environment so degrading I believed we had been flung into hell’s own cesspool.” Written with precision and clarity, Sledge’s memoir is a haunting testament to his struggle to hold on to decency and sanity, and a moving tribute to the esprit de corps of the U.S. Marines.

Flights of Passage (1988) is Samuel Hynes’ evocative and elegiac memoir of his “fairly ordinary flying war.” A “true believer in the religion of flight,” he writes with lyricism, candor, and humor about the joys and dangers of his stateside training as a dive-bomber pilot, the beauty and excitement he experienced flying in combat over the Ryukyu Islands, and his wartime education in the realities of friendship, sex, love, and sudden, random death.

Alvin Kernan enlisted in the Navy in 1941 at age seventeen to escape life on a failing Wyoming ranch. Crossing the Line (1994, revised 2007) is a vividly written account of his remarkable service on three aircraft carriers, first as an aviation ordnanceman and then as an air gunner. A perceptive and thoughtful observer of the sailor’s life at sea and on shore, Kernan witnessed the aftermath of the Pearl Harbor attack and the launching of the Doolittle Raid, armed planes at Midway, survived the sinking of the Hornet, and flew on the final mission of the fighter ace Butch O’Hare.

With thirty-two pages of photographs and endpaper maps.

Eugene Bondurant Sledge (1923-2001), an Alabama native, enlisted in the Marine Corps in 1942 and fought in the Pacific. After the war he enjoyed a long career teaching at the University of Montevallo in Alabama. With the Old Breed was published in 1981 and dramatized in the 2010 HBO miniseries The Pacific, produced by Tom Hanks and Steven Spielberg. Samuel Hynes (1924-2019) grew up in Minnesota and enlisted in 1943. After the war he taught English literature at Swarthmore, Northwestern, and Princeton, publishing numerous critical studies of English writers but becoming best known for his writing about war literature. Alvin Kernan (1924-2018) was raised in Wyoming and enlisted in the Navy in 1941. After the war Kernan attended Williams, Oxford, and Yale, and had a successful teaching career at Yale, 1954-73, and Princeton, 1973-88.

Elizabeth D. Samet is professor of English at West Point and the author of Willing Obedience: Citizens, Soldiers, and the Progress of Consent in America, 1776-1898 (2004), Soldier's Heart: Reading Literature Through Peace and War at West Point (2007), and No Man's Land: Preparing for War and Peace in Post-9/11 America (2014).