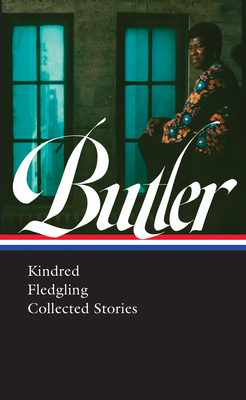 An original and eerily prophetic writer, Octavia E. Butler used the conventions of science fiction to explore the dangerous legacy of racism in America in harrowingly personal terms. She broke new ground with books that featured complex Black female protagonists—“I wrote myself in,” she would later recall—establishing herself as one of thepioneers of the Afrofuturist aesthetic. In 1995 she became the first science fiction writer to receive a MacArthur Fellowship, in recognition of her achievement in creating new aspirations for the genre and for American literature.

This ﬁrst volume in the Library of America edition of Butler’s collected works opens with her masterpiece,  Kindred, one of the landmark American novels of the last half century. Its heroine, Dana, a Black woman, is pulled back and forth between the present and the pre–Civil War past, where she ﬁnds herself enslaved on the plantation of a white ancestor whose life she must save to preserve her own. In Fledgling, an amnesiac discovers that she is a vampire, with a difference: she is a new, experimental birth with brown skin, giving her the fearful ability to go out in sunlight. Rounding out the volume are eight short stories and ﬁve essays—including two never before collected, plus a newly researched chronology of Butler’s life and career and helpful explanatory notes prepared by scholar Gerry Canavan. Butler’s friend, the writer and editor Nisi Shawl, provides an introduction.
Octavia E. Butler (1947-2006) was one of the foremost science fiction writers of her generation, the winner of multiple Hugo and Nebula awards. In 1995 she became the first science fiction writer to receive a MacArthur Fellowship.

Nisi Shawl is a science fiction writer, editor, and journalist whose debut novel Everfair was a 2016 Nebula finalist. A friend of Octavia Butler, Shawl edited Bloodchildren: Stories by the Octavia E. Butler Scholars (2013) and co-edited Strange Matings: Science Fiction, Feminism, African American Voices, and Octavia E. Butler (2013).
"Butler's wide-ranging career as one of the earliest successful African American sci-fi writers is on full display in a capacious new collection from the Library of America . . . allowing both fans of Butler and those unfamiliar with her work to gain an impressively broad view of her oeuvre. . . . Perhaps most important, this collection presents some of Butler's most overtly race-conscious fiction, arriving at a time when the red scar of racism is arguably more visible than it has ever been this century, allowing the anthology to become a part of the country's urgent reflection on the astonishing depths of its racist past and present. . . . [America] needs her blunt but empathetic vision more than ever."
—Gabrielle Bellot, Bookforum

"The collection’s variety reveals the clarity of purpose in a body of work that ranged broadly among species, genres, and millennia. Butler’s great subject was intimate power, of the kind that transforms relationships into fulcrums of collective destiny."
—Julian Lucas, The New Yorker