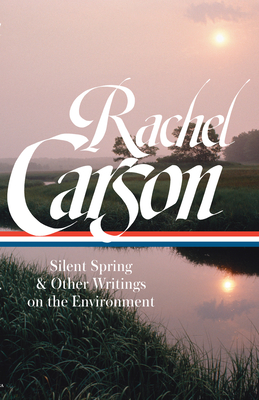 
Not On Our Shelves—Ships in 1-5 Days
The book that sparked the modern environmental movement, with an unprecedented collection of letters, speeches, and other writings that reveal the extraordinary courage and vision of its author

Library of America launches its Rachel Carson edition with this deluxe illustrated volume presenting one of the landmark books of the twentieth century together with rare letters, speeches, and other writings that reveal the personal courage and passionate commitment of its author. A huge bestseller when published in September 1962, Silent Spring led not only to many of the laws and government agencies that protect our air, land, and water, but prompted a revolution in environmental consciousness. Now for the first time, in previously unpublished and newly collected letters to biochemists, ecologists, cancer specialists, ornithologists, and other experts, Carson's groundbreaking expose of the unintended consequences of pesticide use comes together piece-by-piece, like a puzzle or detective story. She makes common cause with conservationists and other allies to build public awareness, hiding her private battle with cancer for fear it might distract from her message. And in the wake of her book's astonishing impact, as she becomes the target of an organized campaign of disinformation by the chemical industry, Carson speaks out in defense of her findings while remaining a model of grace under pressure. Throughout the collection, Carson's lifelong love of nature shines through. In writings both lyrical and intensely moving, she conveys her "sense of wonder" to her young nephew, dreams of conserving old-growth forest in Maine for posterity, and recounts her adventures and epiphanies as birdwatcher and beachcomber. A future companion volume will gather Carson's "sea trilogy": Under the Sea-Wind (1941), The Sea Around Us (1951), and The Edge of the Sea (1955).

LIBRARY OF AMERICA is an independent nonprofit cultural organization founded in 1979 to preserve our nation’s literary heritage by publishing, and keeping permanently in print, America’s best and most significant writing. The Library of America series includes more than 300 volumes to date, authoritative editions that average 1,000 pages in length, feature cloth covers, sewn bindings, and ribbon markers, and are printed on premium acid-free paper that will last for centuries.
Rachel Carson (1907-1964) was born on a family farm near Springdale, Pennsylvania. She earned a master's in zoology at Johns Hopkins before taking a job with the U.S. Bureau of Fisheries. She published Under the Sea-Wind (1941), The Sea Around Us (1951, winner of a National Book Award), and The Edge of the Sea (1955). Silent Spring (1962), her expose of the disastrous ecological effects of pesticide use, was an international bestseller.

A research biologist and cancer survivor, Sandra Steingraber was inspired to activism by Silent Spring, becoming one of America's leading environmental writers and antipollution advocates. Distinguished Scholar in Residence at Ithaca College, her books include Living Downstream: An Ecologist's Personal Investigation of Cancer and the Environment (1997), Having Faith: An Ecologist's Journey to Motherhood (2001), and Raising Elijah: Protecting Our Children in an Age of Environmental Crisis (2011).
“The number of books that have done as much good in the world [as Silent Spring] can be counted on the arms of a starfish.” —Jill Lepore, The New Yorker

“Silent Spring, then as now, is a shock. . . . Two hundred pages of letters and talks and short articles fill out the balance of [this Library of America] edition, two hundred bright points of light whose constellation is an image of scientific effort, scientific outreach, science-backed advocacy.”
—Daegan Miller, Bookforum


"Silent Spring remains five decades after publication, an impressive piece of work—and a deserving candidate for the Library of America series. . . . To read [it] now is in part to understand how we got to where we are."
— Charles C. Mann, The Wall Street Journal

“Some say Rachel Carson almost single-handedly launched the modern environmentalist movement with Silent Spring. This Library of America collection brings that groundbreaking work together with her writings to reassert just how influential she was. A vital collection for any environmentalist.”  —Chicago Review of Books


"Reading Silent Spring today, in the hazy reddish glow of climate catastrophe, is both an exhilarating and a melancholy pleasure. The story of Carson’s dogged pursuit of truth against all odds – the lack of settled science, her own daily struggle with breast cancer, the personal attacks launched by the chemical industry after the book’s publication – is profoundly inspiring at a time when hope in such endeavours seems to be in short supply." —London Review of Books