The Departure: The Owner: Book One (Paperback) 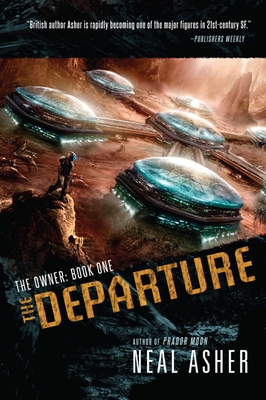 The Departure: The Owner: Book One (Paperback)

This is book number 1 in the Owner series.

An overpopulated world is under the brutal, high-tech thumb of the Committee. Towering robot shepherds, pain-inducers, and reader guns maintain control over masses of zero-asset citizens, but for the elite this not enough. Twelve billion must human beings must die before the Earth can be stabilized, and the Argus satellite laser network is almost ready.

Waking in a crate destined for an incinerator, Alan Saul remembers only pain and his torturer’s face. But he has company: Janus, a rogue AI inhabiting the forbidden hardware in his skull. Saul intends to stop Argus and get his revenge on the Committee–once he finds out who he used to be.

Abandoned by the Committee, the Antares Base faces extinction. The colonists there will not be returning to Earth nor will they be receiving any additional supplies or support. Unless they are very ingenious, they will run out of resources and be dead within five years.

As if that’s not dire enough, Varalia Delex finds herself caught in a violent power struggle with the base’s ruthless political officers–who see everyone else as expendable. As spilled blood turns the Red Planet even redder, Var discovers that Mars holds very new and interesting ways to die

Skyhorse Publishing, under our Night Shade and Talos imprints, is proud to publish a broad range of titles for readers interested in science fiction (space opera, time travel, hard SF, alien invasion, near-future dystopia), fantasy (grimdark, sword and sorcery, contemporary urban fantasy, steampunk, alternative history), and horror (zombies, vampires, and the occult and supernatural), and much more. While not every title we publish becomes a New York Times bestseller, a national bestseller, or a Hugo or Nebula award-winner, we are committed to publishing quality books from a diverse group of authors.
Neal Asher was born in Billericay, Essex, and divides his time between here and Crete. His previous full-length novels are Gridlinked, The Skinner, The Line of Polity, Cowl, Brass Man, The Voyage of the Sable Keech, Polity Agent, Hilldiggers, Prador Moon, Line War, Shadow of the Scorpion, Orbus and The Technician.