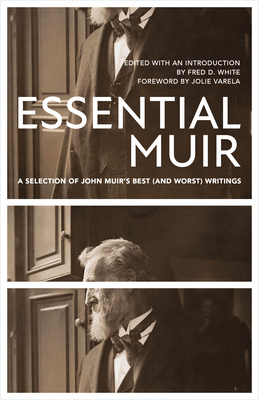 
Not On Our Shelves—Ships in 1-5 Days
A new edition of Muir's writings that places his environmentalist ideals alongside his damaging prejudices Essayist. Preservationist. Mountain man. Inventor. John Muir may be California's best-known icon. A literary naturalist and founder of the Sierra Club and Yosemite National Park, Muir left his legacy on the landscape and on paper. But the celebrity of John Muir does not tell the whole story. In Essential Muir, for the first time, Muir's selected writings include those that show his ecological vision without ignoring his racism, providing a more complete portrait of the man. Taking the best of John Muir's writings on nature and placing them alongside his musings on religion, society, and his fellow humans, Essential Muir asks the reader to consider how these connect, and what that means for Muir's legacy in environmentalism today. Fred D. White's selections from Muir's writings, and his illuminating commentary in his revised introduction, reveal the complex man and writer behind the iconic name. In the new foreword, Jolie Varela (Tule River Yokut and Paiute) of Indigenous Women Hike speaks back to Muir, addressing the impact of his words and actions on California Indians. This collection, which highlights John Muir's charms and confronts his flaws, is vital for understanding the history of environmental thought.