In Praise of Love (Hardcover) 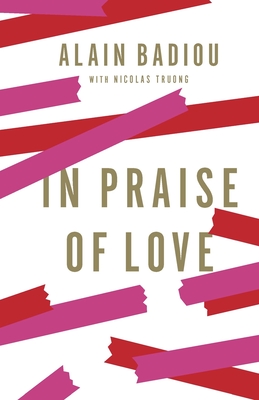 In Praise of Love (Hardcover)


Not On Our Shelves—Ships in 1-5 Days
In a world rife with consumerism, where online dating promises risk-free romance and love is all too often seen only as a variant of desire and hedonism, Alain Badiou believes that love is under threat. Taking to heart Rimbaud's famous line "love needs reinventing," In Praise of Love is the celebrated French philosopher's passionate treatise in defense of love. For Badiou, love is an existential project, a constantly unfolding quest for truth. This quest begins with the chance encounter, an event that forever changes two individuals, challenging them "to see the world from the point of view of two rather than one." This, Badiou believes, is love's most essential transforming power. Invoking a vibrant cast of thinkers, from Kierkegaard, Plato, and de Beauvoir to Proust, Lacan, and Beckett, Badiou creates a new narrative of love in the face of twenty-first-century modernity. Moving, zealous, and wise, In Praise of Love urges us not to fear love but to see it as an adventure, a magnificent undertaking that compels us to explore others and to move away from an obsession with ourselves.
Born in Rabat, Morocco, in 1937, Alain Badiou is a leading French philosopher. He is the author of The Meaning of Sarkozy, Being and Event, Ethics: An Essay on the Understanding of Evil, and The Communist Hypothesis. He lives in Paris. Nicholas Truong is a writer, journalist, and regular contributor to the French daily Le Monde. Peter Bush is an award-winning literary translator. He lives in Barcelona.

Advance acclaim for In Praise of Love:
"Finally, the cure for the pornographic, utilitarian exchange of favors to which love has been reduced in America. Alain Badiou is our philosopher of love."
Simon Critchley, Hans Jonas Professor at The New School for Social Research, author of The Faith of the Faithless

"Elegant and deeply human, In Praise of Love is a conversational but erudite retort to the antiseptic promises of online dating sites for 'safe love' without risk, the romantic notion that love is the ecstatic melding of two into one, and the philosophical skepticism that love is little more than a cover story for sexual lust."
Pamela Haag, Ph.D., author of Marriage Confidential: Love in the Post-Romantic Age, columnist at Big Think magazine

Praise for Alain Badiou:
"A figure like Plato or Hegel walks here among us!"
Slavoj Zizek

"An heir to Jean-Paul Sartre and Louis Althusser."
New Statesman