The Devil in Dover: An Insider's Story of Dogma v. Darwin in Small-Town America (Paperback) 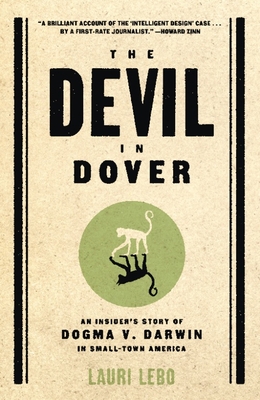 The Devil in Dover: An Insider's Story of Dogma v. Darwin in Small-Town America (Paperback)


Not On Our Shelves—Ships in 1-5 Days
"A brilliant account" of the controversial 2005 legal battle between evolution and creationism in public education "by a first-rate journalist" (Howard Zinn). In 2004, the School Board of Dover, Pennsylvania, decided to require its ninth-grade biology students to learn intelligent design--a pseudoscientific theory positing evidence of an intelligent creator. In a case that recalled the infamous 1925 Scopes "monkey" trial, eleven parents sued the school board. When the case wound up in federal court before a President George W. Bush-appointed judge, local journalist Lauri Lebo had a front-row seat. Destined to become required reading for a generation of journalists, scientists, and science teachers, as well as for anyone concerned about the separation of church and state, The Devil in Dover is Lebo's acclaimed account of religious intolerance, First Amendment violations, and an assault on American science education. Lebo skillfully probes the background of the case, introducing the plaintiffs, the defendants, the lawyers, and a parade of witnesses, along with Judge John E. Jones III, who would eventually condemn the school board's decision as one of "breathtaking inanity." With the antievolution battle having moved to the state level--and the recent passage of state legislation that protects the right of schools to teach alternatives to evolution--Lebo's work is more necessary than ever. "Lebo courageously exhibits the highest standards in intellectual honesty and journalistic ethos." --Daily Kos "An unapologetic indictment of intelligent design, fundamentalist Christianity, and American journalism's insistence on objectivity in the face of clear untruths." --Columbia Journalism Review

Lauri Lebo has been a journalist for twenty years. As part of an investigative reporting team, she helped solve two civil rights-era murders. As the York Daily Record's education reporter, she covered the intelligent design trial from its earliest beginnings at local school board meetings. Her book on the trial, The Devil in Dover: An Insider's Story of Dogma v. Darwin in Small-Town America, was The New Press's first Studs and Ida Terkel Author Fund book. The winner of numerous state and national awards, Lebo lives in Harrisburg, Pennsylvania.