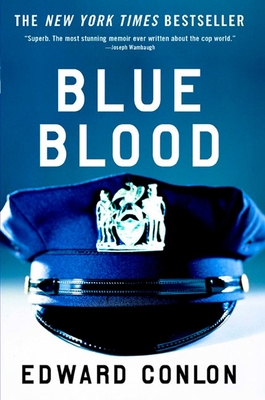 
Special Order—Subject to Availability
"A great book... with the testimonial force equal to that of Michael Herr's Dispatches."—Time

Edward Conlon's Blue Blood is an ambitious and extraordinary work of nonfiction about what it means to protect, to serve, and to defend among the ranks of New York's finest. Told by a fourth generation NYPD, this is an anecdotal history of New York as experienced through its police force, and depicts a portrait of the teeming street life of the city in all its horror and splendor. It is a story about police politics, fathers and sons, partners who become brothers, old ghosts and undying legacies.  Conlon joined the NYPD during the Giuliani administration, when New York City saw its crime rate plummet but also witnessed events that would alter the city, its inhabitants, and its police force forever: polarizing racial cases, the proliferation of the drug trade, and the events of September 11, 2001, and its aftermath. Conlon captures the detail of the landscape, the ironies and rhythms of natural speech, the tragic and the marvelous, firsthand, day after day. A New York Times Notable Book and Finalist for The National Book Criticics Circle Award for Nonfiction.
Edward Conlon is a detective with the NYPD. A graduate of Harvard, he has published columns in The New Yorker under the byline Marcus Laffey.
"[A] sprawling, wry, opinionated, beautifully written memoir." - The New York Times

"He illuminates every aspect of police work with wisdom and wry humour...Blue Blood is a memoir that casts back to the earliest days of New York’s police. It is also a family history, written with love and esteem..." -The Telegraph

"A sprawling, loose-limbed collection of funny and harrowing on-the-clock anecdotes, broken up by numerous digressions into family and institutional history..." - AV Club