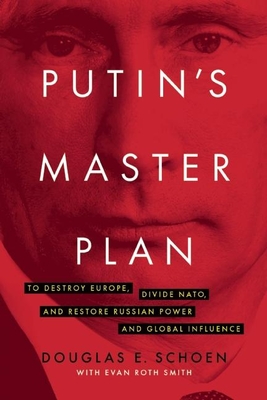 
Not On Our Shelves—Ships in 1-5 Days
Vladimir Putin has a master plan to destroy Europe, divide NATO, reclaim Russian influence in the world, and most of all to marginalize the United States and the West in order to achieve regional hegemony and global power. Putin's unified strategy and vision for Europe has not been thoroughly discussed or articulated in any meaningful way until now. Putin's Master Plan is the first comprehensive attempt to systematically explain Putin's global strategy, which could inevitably and inexorably lead to the breakup of the NATO alliance, and potentially to war with the West. Currently, the West has no strategy, no plan, and no tactics to confront Putin's master plan other than imposing limited economic sanctions, which have done little to deter Putin's aggression--and may well have encouraged and facilitated it. The viewpoint taken here is not just alarmism, but an accurate and, for the first time, clear and sober portrayal of a frightening situation that, more and more, serious observers of European and Russian politics are openly recognizing and acknowledging. Putin's Master Plan makes the case that it is essential to wake up to Putin's strategy to destroy Europe, divide NATO, and build a new empire in the former Soviet Union. Russia has demonstrated an extraordinary level of aggression, most boldly in its outright invasions of Georgia and Ukraine. American weakness and a divided Europe have left Russia's terrified neighbors without an alternative to Russian domination, and even once-stalwart American allies such as the Republic of Georgia are on the brink of becoming part of Putin's new empire in Europe. Putin has made it clear that he sees NATO expansion as a fundamental threat to Russian nationhood, and he is systematically challenging the NATO Alliance as well as the United States. So far, he is winning.

Douglas E. Schoen has been one of the most influential Democratic campaign consultants for over thirty years. A founding partner and principal strategist for Penn Schoen Berland, he is widely recognized as one of the coinventors of overnight polling. His political clients include New York City mayor Michael Bloomberg and Indiana governor Evan Bayh, and his corporate clients include the former AOL Time Warner, Procter & Gamble, and AT&T. Internationally, he has worked for the heads of states of over fifteen countries. He is the author of multiple books and his newest, The Nixon Effect, was published in 2016. Schoen is a regular contributor to the Wall Street Journal, the Washington Post, and various other newspaper and online publications, as well as Fox News. Evan Roth Smith is a political strategist and communications consultant based in New York City. He has worked for political and private-sector clients in all fifty states and more than a dozen countries, including the United Kingdom, South Africa, Israel, Turkey, and Japan. Smith has advised Democratic, Republican, and Independent campaigns, as well as mayoral, presidential, and prime-ministerial candidates around the world. Shortly after the Russian invasion of Ukraine, Smith traveled extensively throughout Europe and the former Soviet Union, conducting interviews with senior diplomats, academics, and politicians in Kiev, Istanbul, Stockholm, Tallinn, Chisinau, Zurich, and Tbilisi, which he provided exclusively for Putin's Master Plan. Smith is a graduate of the Edmund A. Walsh School of Foreign Service at Georgetown University.