Abuse of Discretion: The Inside Story of Roe V. Wade (Hardcover) 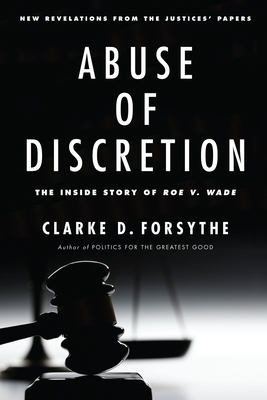 Abuse of Discretion: The Inside Story of Roe V. Wade (Hardcover)


In Stock—Click for Locations
Based on 20 years of research, including an examination of the papers of eight of the nine Justices who voted in Roe v. Wade and Doe v. Bolton, Abuse of Discretion is a critical review of the behind-the-scenes deliberations that went into the Supreme Court's abortion decisions and how the mistakes made by the Justices in 1971-1973 have led to the turmoil we see today in legislation, politics, and public health. The first half of the book looks at the mistakes made by the Justices, based on the case files, the oral arguments, and the Justices' papers. The second half of the book critically examines the unintended consequences of the abortion decisions in law, politics, and women's health. Why do the abortion decisions remain so controversial after almost 40 years, despite more than 50,000,000 abortions, numerous presidential elections, and a complete turnover in the Justices? Why did such a sweeping decision--with such important consequences for public health, producing such prolonged political turmoil--come from the Supreme Court in 1973? Answering those questions is the aim of this book. The controversy over the abortion decisions has hardly subsided, and the reasons why are to be found in the Justices' deliberations in 1971-1972 that resulted in the unprecedented decision they issued. Discuss Abuse of Discretion on Twitter using hashtag #AbuseOfDiscretion.

Clarke D. Forsythe is Senior Counsel at Americans United for Life. Clarke has a B.A. from Allegheny College, a J.D. from Valparaiso University, and an M.A. in Bioethics from Trinity International University. Clarke has been co-counsel for parties in three U.S. Supreme Court cases, has argued cases before federal and state appellate courts and has testified before Congress and state legislatures. He is the author of Politics for the Greatest Good: The Case for Prudence in the Public Square (InterVarsity Press (IVP), 2009). Clarke and his wife, married for 31 years, have five daughters.