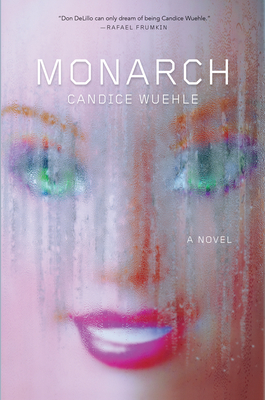 After waking up with a strange taste in her mouth and mysterious bruises, former child pageant star Jessica Clink unwittingly begins an investigation into a nefarious deep state underworld. Equipped with the eccentric education of her father, Dr. Clink (a professor of Boredom Studies and the founder of an elite study group known as the Devil’s Workshop), Jessica uncovers a disquieting connection between her former life as a beauty queen and an offshoot of Project MKUltra known as MONARCH.

As Jessica moves closer to the truth, she begins to suspect the involvement of everyone around her, including her own mother, Grethe (a Norwegian pageant queen turned occult American wellness guru for suburban housewives). With the help of Christine (her black-lipsticked riot grrrl babysitter and confidante), Jessica sets out to take down Project MONARCH. More importantly, she must discover if her first love, fellow teen queen Veronica Marshall, was genuine or yet another deep state plant.

Merging iconic true crime stories of the ’90s (Lorena Bobbitt, Nicole Brown Simpson, and JonBenét Ramsey) with theories of human consciousness, folklore, and a perennial cultural fixation with dead girls, MONARCH questions the shadow sides of self-concept: Who are you if you don’t know yourself?
Candice Wuehle is the author of the poetry collections Fidelitoria: Fixed or Fluxed, BOUND, and Death Industrial Complex, shortlisted for the Believer Book Award. A graduate of the Iowa Writers’ Workshop, she holds a PhD in literary studies and creative writing from the University of Kansas.
A NPR Best Book of the Year
A Lambda Literary Best Book of the Month
A CrimeReads Best Book of the Month
A Bustle Most Anticipated Book of the Month
One of Lit Hub's Most Anticipated Books of the Year

"Candice Wuehle's irresistibly weird debut novel MONARCH is the kind of book that you want to start reading again immediately after turning the last page—not just to trace the conspiracy at its heart, but to appreciate how its kaleidoscope of beauty pageants, Y2K anxieties, famous dead girls, and deep state machinations synthesizes into an exploration of what makes up a self . . . Poetic, haunting." —Kristen Martin, NPR

"If the vacant, robotic gaze of the beauty queen has ever seemed sinister to you, Ms. Wuehle provides a possible reason . . . Wuehle pursues her gonzo premise with satirical gusto, mixing together some curious brew of Robert Ludlum and Don DeLillo . . . [A] lively debut." —Sam Sacks, The Wall Street Journal

"Intoxicating and strange . . . A novel that's as addicting as it is heartbreaking." —Sophia June, NYLON, One of the Must-Read Books of the Month

"Candice Wuehle had me at 'Jon Benet Ramsey.' The poet's new novel follows a former child pageant star as she discovers ties to her previous glory and a deep state government program. Add an occult wellness guru to the mix, a heaping of mommy issues, and a queer romance for taste and this might just be my ideal book." —Kerensa Cadenas, Thrillist

"Wuehle’s net of insights, jokes, linguistic will-o’-the-wisps push the definition of surreal . . . Wuehle is a poet writing a thriller, and the cerebral, beautiful poetry intoxicates the story . . . A maze of lyrically breathtaking imagery and storytelling that rivals the stepping-stone pathways across the dream-river in the films of Charlie Kaufman (see Eternal Sunshine of the Spotless Mind, Synechdoche, New York, I’m Thinking of Ending Things, etc) . . . ‘90s pop culture, espionage, occultism are all bonded in an amalgam of feminist folklore for the 21st century." —Jesse Hilson, Pink Plastic House

"Monarch is a novel of ideas welded to the structure of a page-turner . . . Darkly comic, cynical, thought-provoking, and strange, Wuehle’s novel is a rare offering." —Mara Krause, ZYZZYVA

"Wuehle is catching a wave of nineties nostalgia and retrospective media criticism, in large part ushered in by the immensely popular podcast, 'You’re Wrong About' . . . As much as MONARCH is a conspiracy-theory-thriller, inviting the possibility that an amorphous, terrible something in one’s environment might be located and made legible, it is also a story about piecing together the fuzzy impressions of childhood, watching as they form into a coherent whole the way a photo develops in a darkroom. Wuehle is masterful . . . An artisan; one senses while reading her that she has absolute control over the page—could conjure any emotion or image with startling concision, no matter how surreal or uncanny." —Lily Houston Smith, Chicago Review of Books

"A sinisterly fun novel . . . For fans of Stranger Things mixed with Little Miss Sunshine. It doesn’t sound like it works, but it sure as hell does." —Adam Vitcavage, Debutiful

"What does it mean when you’re not who you thought you were? Alternately: the categories of 'beauty queen' and 'sleeper agent' have, historically speaking, not had much overlap. Candace Wuehle’s forthcoming Monarch poses the question: what if someone could lay claim to both of those job descriptions? Throw in a touch of the occult and a bit of punk rock and you have an intriguing combination." —Tobias Carroll, Tor.com

"Fantastically strange . . . Monarch feels a bit like the folks behind You’re Wrong About teamed up with the writers of Killing Eve, and they all did some psychedelics and wrote a script together." —Molly Odintz, CrimeReads, A Most Anticipated Book

"A deeply introspective novel with a notable metaphor for reinvention after trauma in the form of a weaponized pageant girl." —Kirkus Reviews

“A wise, unsettling, and multifaceted masterpiece, MONARCH succeeds on all levels—as a portrait of an endearingly dysfunctional family, as a shadow history of Y2K and the hidden power structure underlying and undermining contemporary life, and as a profound exploration of the extremely dicey prospect of being a self in a body in the world. Unless you’re hiding in an underground city or frozen in a kryokammer in the desert, you'll want to run out and get this one right away!” —David Leo Rice, author of The Dodge City Trilogy, Angel House, and Drifter: Stories

“In this riddled pageantric, insomniac, photographic, and university-infused world of eating disorders, triple suicides, astral projections, enigmatic bruises, and uncontrollable impulses, Candice Wuehle’s poetic and narrative gaze on everything she Midas-touches is eyelined, eyeshadowed, polished, Norwegian lip-penciled, and loose powdered with her devilishly inventive, singularly imaginative beauty and a devastating wry sense of humor. Her brilliance in MONARCH will lacquer, enamel, and wax you and turn your mind inside out like a monarch butterfly macerated in emulsion.” —Vi Khi Nao, author of The Vegas Dilemma and Swimming with Dead Stars

"Don DeLillo can only dream of being Candice Wuehle, who's wrenched the maximalist postmodern novel from the hands of old white men and given it an enticingly feminist spin. MONARCH is a smart, weird, funny gut punch, the kind of book that will blister your brain in the best possible way." —Rafael Frumkin, author of The Comedown