Path of the Assassin Volume 5: Battle of One Hundred and Eight Days (Paperback) 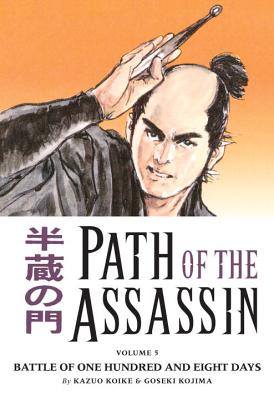 Path of the Assassin Volume 5: Battle of One Hundred and Eight Days (Paperback)


Special Order—Subject to Availability
It’s a battle of ninja vs. ninja, with all the stops pulled out and every trick in the book. Well, almost every trick. Our protagonist/ninja, Hanzo’s young ninja wife, Tsukumo, must avenge her father’s death at the hands of another shadow warrior, but he’s as crafty as they come. This mystical, imaginative faceoff consumes all 300 plus pages of this action-stuffed volume.
Kazuo Koike is a prolific Japanese manga writer, novelist, and entrepreneur. Early in Koike's career, he studied under Golgo 13 creator Takao Saito and served as a writer on the series. Koike, along with artist Goseki Kojima, made the manga Kozure Okami (Lone Wolf and Cub), and Koike also contributed to the scripts for the 1970s film adaptations of the series, which starred famous Japanese actor Tomisaburo Wakayama. Another series written by Koike, Crying Freeman, which was illustrated by Ryoichi Ikegami, was adapted into a 1995 live-action film by French director Christophe Gans.

Goseki Kojima was a Japanese manga artist known for his collaborations with Kazuo Koike. The team was often referred to as the “Golden Duo.” Kojima’s best-known work was Lone Wolf and Cub. Other titles attributed to Kojima are Samurai Executioner and Path of the Assassin. In 2004, Kojima won an Eisner Award.