The Smallest Elephant in the World (Hardcover) 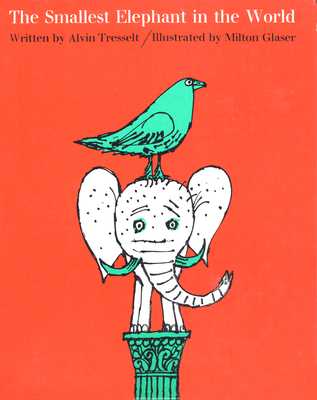 The Smallest Elephant in the World (Hardcover)

First published in 1959, The Smallest Elephant in the World, written by Alvin Tresselt and illustrated by Milton Glaser, is a witty, sweet, and funny tale of friendship and the search for home.

Mocked throughout the jungles of India due to his small size, the smallest elephant in the world--no bigger than a house cat--has decided enough is enough. After all, if he's no bigger than a house cat, then a house must be where he belongs After a long journey in the hold of a ship, this smallest elephant in the world finds himself a home with a nice little boy inside. But he must disguise himself as a cat to satisfy the boy's mother, and disaster strikes when he is confronted with his first mouse... Little does he know that the perfect home is waiting for him, in a circus where differences are celebrated, not scorned.

The Smallest Elephant in the World is a fun book about an elephant who learns to accept his unique qualities as he seeks to find a place where he fits in. This children's book will teach kids all about belonging, friendship, and acceptance.

Alvin Tresselt (1916-2000) was the author of more than fifty books for children, which have sold over a million copies altogether. White Snow, Bright Snow, illustrated by Roger Duvoisin, won a Caldecott Medal in 1948, and Hide and Seek Frog, also illustrated by Duvoisin, won a Caldecott Honor Award. He was also the editor of Humpty Dumpty's Magazine, a children's publication, and executive editor and vice president of Parents' Magazine Press from 1967 to 1974. Milton Glaser (b.1929) is among the most celebrated graphic designers in the United States. He has had the distinction of one-man-shows at the Museum of Modern Art and the Georges Pompidou Center. He was selected for the lifetime achievement award of the Cooper Hewitt National Design Museum (2004) and the Fulbright Association (2011), and in 2009 he was the first graphic designer to receive the National Medal of the Arts award. As a Fulbright scholar, Glaser studied with the painter, Giorgio Morandi in Bologna, and is an articulate spokesman for the ethical practice of design. He opened Milton Glaser, Inc. in 1974, and continues to produce a prolific amount of work in many fields of design to this day.