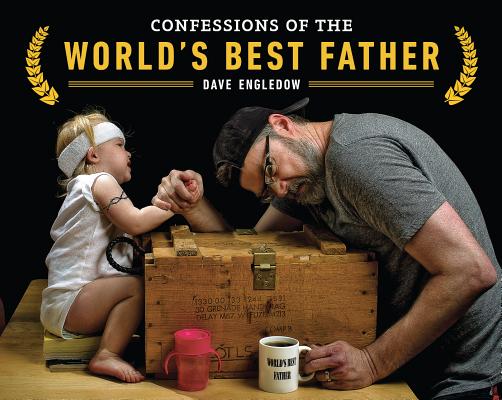 Merging a Norman Rockwell aesthetic with a darkly comic sensibility, Dave pairs each side-splittingly funny image with a log entry describing the awkward situation that the World’s Best Father has found himself in. Hilarious and heartwarming, Confessions of the World’s Best Father is a celebration of the early years of parenthood.
Dave Engledow studied photojournalism at the University of Texas at Austin. He currently lives in the Washington, DC, area.
"… in this clever send-up of perfect parenting . . . each grittily realistic photo is accompanied by hilarious commentary from Engledow, who appears to possess a quality every dad should have: the ability to laugh at himself."
—Book Page

"in a funny new book, photographer Dave Engledow skewers the art of being a dad."
—People

"His gorgeous, hilarious, reality-bending photos pair Engledow with his daring daughter, Alice Bee, in situations that would make parents cringe—if they weren’t laughing out loud, that is."
—Parade.com

"...a perfect work of satire, which every parent will love and return to often...a unique book, that also happens to be a work of art"
—Jason Good, stand-up comedian and author of This is Ridiculous, This is Amazing

"A goofy and heart-gladdening tribute to all the joys and slings and arrows of raising a daughter."
—Kirkus Reviews

“A hilariously twisted response to all those cutesy shots that parents post on Facebook.”
—Working Mothers (“Dad’s Who Rock: 25 Superstar Fathers”)

A Conversation with Dave Engledow, author of Confessions of the World's Best Father, featuring Alice Bee

Q: How did you get the idea for these photographs? What did friends and family say when they first saw them?

A: From the minute Alice Bee was born, I knew that I wanted to be as creative as possible in documenting her childhood.  I was one of the many Facebook users complaining about the overabundance of baby pictures in my feed, so I was determined to do something different.  I've never been a fan of overly cutesy or poignant baby photos, so the idea of subverting/satirizing traditional baby photography really appealed to me.  I had not originally intended to insert myself into the images, but soon after Alice Bee was born, I was inspired (probably due to lack of sleep) to portray what new fatherhood felt like to me at the time—I wanted to show the cluelessness and exhaustion felt as a new father, while poking fun at myself.  This inspiration turned into a shot of me holding Alice Bee like a football while distractedly squirting her milk into my coffee mug.

The response from friends and family was almost overwhelmingly positive. My mom didn’t approve of that first shot (“I can’t believe you’re using her milk in your coffee”) but she is now a HUGE fan of the series.  As we created and posted more images online, our audience grew tremendously.  There were insistent requests from some of our more demanding friends to make a calendar, and things just sort of took off from there.


Q: How do you get Alice Bee to cooperate when setting up and taking the photographs?

A: Getting Alice Bee to cooperate is the most challenging aspect of creating these images.  Sometimes it’s really easy, particularly when we are doing something that she actually wants to do, like dropping things into the toilet or pouring syrup on pancakes.  We generally try to set up the shoots like it’s a game, and recently we began building it up during the week by telling her we have a new toy for her to use or a new outfit to wear (like the adding machine for our tax day shoot or a doctor’s coat for our house call shoot).  But really, it all comes down to the quality of incentives (bribes) that we provide during the shoot—fruit snacks work wonders, as does chocolate. The most important lessons we’ve learned are: make sure that we have plenty of time set aside so we don’t have to rush; have patience and take breaks if she gets bored; and make sure she’s well-fed and well-rested before the shoot.


Q: How long does the whole process take, from set-up to finish? Minutes? Hours? Days?

A: Total time to create one of these images from start to finish is anywhere from 8 to 20 hours. It generally takes me about 1-2 hours to compose the scene, get the camera on the tripod, and set up the lights.  We’ll then shoot Alice Bee, and this can take anywhere from 10 minutes to an hour or more, depending on how cooperative she is.  I then set the camera to fire every 6 seconds and shoot my part, and this can take another 30 minutes or so until I nail the expression that I want.  The longest part is editing, which can take me anywhere from 5 to 15 hours.

Q: What does your wife think of all this? Is she ever scared or mad when you show her what you & Alice do when she’s not around?

A: Jen has been involved in this project from the very beginning and has been responsible for brainstorming a number of the concepts we’ve explored.  She assists with the shoots and is always off-camera to direct Alice Bee and make sure that she is safe and happy.  Jen and I always go through the images together to decide which ones to use for the final composite.

The only times Jen is not involved in shooting is when she is away on assignments for the Army, including a one-year unaccompanied tour to Seoul. During that year that she was gone, I made it a goal to try and do a photo shoot every single week, so that Jen would have new photos of Alice Bee every week.  And even though she wasn’t around to assist with the shoots, Jen and I still reviewed the raw images and made final editing decisions together via Google hangout.

Jen loves these images and is generally happy to help out, although she can occasionally get a little frustrated, like when I decide to make a funny picture of me and Alice Bee attempting to fix the disposer, rather than ACTUALLY fixing the disposer.


Q: What do you hope people take away from your pictures, besides a ton of laughs? Has your impression of fatherhood changed since you undertook this project?

A: It’s funny—my initial intent with these images was to create something a bit darker that subverted the cutesy, overly-poignant clichés you see in a lot of traditional baby portraiture.  I never intended for this project to be a heartwarming, feel-good story. Ironically, what a lot of people tell me they take away from these images is the obvious love that I have for Alice Bee—people see beyond the silly, satirical character I portray in these images and instead see a father who has decided to spend his precious free-time creating something special and unique for his daughter.  I guess that’s pretty cool, if unintended and unexpected.

I’m sure my impression of fatherhood has changed since I undertook this project, but I’m still just as scared, clueless, and neurotic about it as I was when I started creating these images—it’s just that the worries are different now.  Instead of worrying that I’m going to leave her in her car seat on top of the car, I worry that I’m simultaneously neglecting and over-protecting her when we go to the playground.  I’m guessing that these types of worries will continue throughout the course of my fatherhood.


Q: How much are you like, or unlike, the dad you portray in your images?

A: In many ways, these images have provided a vehicle for me to play out the worries that I have as a new father and to parody the father I hope I never become.  I think the shots that show me being distracted (reading the Sports page, absorbed in my laptop/ iPad) are the ones that hit closest to home and portray my biggest fear as a father—a tendency to get absorbed in things and not pay enough attention to those around me.  Also, like the father portrayed in the images, I love food and I love to cook.  Alice Bee also likes to help out in the kitchen in real life, and I’m genuinely excited about teaching her to cook.

There are plenty of ways that I’m very different from the World’s Best Father character.  He drinks a lot; I rarely drink (I’d like to, but I’m just too exhausted at the end of the day). He puts Alice Bee in dangerous situations involving flames, sharp objects, and treacherous perches; I am overly cautious about that sort of thing. He knows how to dance to Gangnam Style; I couldn’t do it if my life depended on it.

Some parents these days seem to nearly beg for our attention when it comes to pictures and status updates about what’s going on with their kids. After you check out Engledow’s pictures, it becomes clear that he doesn’t have to beg for any of our attention. He already has it. — Nick Shell, Parents Magazine

Dave Engledow stole our hearts with photos of him and his little baby girl Alice Bee in some truly hilarious situations. Though they’ll make practically anyone laugh, these images will really [melt the] hearts of first-time parents. — Alice Yoo, Founder and Editor-in-Chief of My Modern Metropolis

Is Dave Engledow the World’s Best Father? Well, these photos make a pretty compelling argument that he is: from arm wrestling with his daughter Alice, to looking on as she irons his shirts to using her as a ballet foot rest, Dave clearly just wants her to be involved in his life. — George Strumboulopoulos Tonight

In 'Dads Who Rock: 25 Superstar Fathers' feature: "a hilariously twisted response to all those cutesy shots that parents post on Facebook." — Working Mothers Magazine

"...he really might be the best [father], or at least the funniest." — Babble.com