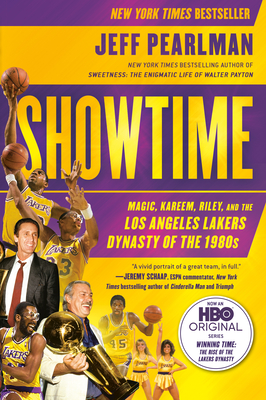 
Not On Our Shelves—Ships in 1-5 Days
The New York Times bestselling author of Sweetness and Gunslinger delivers the first all-encompassing account of the 1980s Los Angeles Lakers, one of professional sports’ most-revered—and dominant—dynasties.

The Los Angeles Lakers of the 1980s personified the flamboyance and excess of the decade over which they reigned. Beginning with the arrival of Earvin “Magic” Johnson as the number-one overall pick of the 1979 draft, the Lakers played basketball with gusto and pizzazz, unleashing coach Jack McKinney’s “Showtime” run-and-gun style on a league unprepared for their speed and ferocity—and became the most captivating show in sports and, arguably, in all-around American entertainment. The Lakers’ roster overflowed with exciting all-star-caliber players, including center Kareem Abdul-Jabbar, and they were led by the incomparable Pat Riley, known for his slicked-back hair, his Armani suits, and his arrogant strut. Hollywood’s biggest celebrities lined the court and gorgeous women flocked to the arena. Best of all, the team was a winner. Between 1980 and 1991, the Lakers played in an unmatched nine NBA championship series, capturing five of them.

Bestselling sportswriter Jeff Pearlman draws from almost three hundred interviews to take the first full measure of the Lakers’ epic Showtime era. A dazzling account of one of America’s greatest sports sagas, Showtime is packed with indelible characters, vicious rivalries, and jaw-dropping, behind-the-scenes stories of the players’ decadent Hollywood lifestyles.  From the Showtime era’s remarkable rise to its tragic end—marked by Magic Johnson’s 1991 announcement that he had contracted HIV—Showtime is a gripping narrative of sports, celebrity, and 1980s-style excess.
Jeff Pearlman is a New York Times bestselling author and sports writer. He has worked as a columnist for SI.com and ESPN.com, a senior writer for Sports Illustrated, a features writer for Newsday, and a contributor to The Wall Street Journal and CNN.com. He lives in New York.
Praise for Showtime

“The Showtime Lakers are the dynasty that forever changed the NBA, transforming a game into an entertainment spectacle. Through his relentless reporting and buoyant writing, Jeff Pearlman has delivered the story in full, from rare insight into Kareem and Magic to what (ital) really (ital) went on after-hours in the Forum Club. Once you start "Showtime," you won't be able to put it down.”
—Adrian Wojnarowski, Yahoo Sports NBA columnist and author of the The Miracle of St. Anthony

“An era that redefined the game has found a storyteller more than up to the task. By any measure, Showtime is magic.”
—Mark Frost, author of The Greatest Game Every Played

“Showtime proves to be prime-time literary entertainment. A rocking, roller-coast of a ride it reads like the Lakers of Magic and Riley played – an artistic fast-break of revealing, sometimes shocking tales tinged with sex, drugs and, most of all humanity. You want to know the real story behind a beautifully dysfunctional basketball dynasty? Read this book.”
—Armen Keteyian, 60 Minutes Sports

“The names (Magic, Kareem, Worthy, Riley, Buss) and the games (four championships) have long been studied by basketball's anthropologists. But so much of the story of the Showtime Lakers, THE Team of the 80s, took place behind closed doors. Jeff Pearlman, as is his wont, pries them open and finds … a whole lot of L.A. living.”
—Jack McCallum, author of New York Times best-seller Dream Team

"Pearlman is an indefatigable reporter, and here he provides an all-access pass to one of the game's greatest dynasties, with tales of Kareem, Magic, Riley and Jerry Buss in their heyday. It's a book any NBA fan - any sports fan - will devour, likely in one or two sittings."
—Chris Ballard, Senior Writer, Sports Illustrated

Jeff Pearlman, typically, delivers the goods, celebrating them for their achievements, pulling no punches on the subject of their shortcomings. This is a vivid portrait of a great team, in full.”
—Jeremy Schaap, ESPN commentator, New York Times best-selling author of Cinderella Man and Triumph

"Once again, Jeff Pearlman has produced an exhaustively researched, elegantly written book that recreates one of the most colorful and memorable teams of the modern era. Showtime is a great show indeed, full of colorful (and complicated) characters as well as a trove of details that even the most passionate fans will be amazed to learn. No basketball fan's bookshelf will be complete without it."
—Seth Davis, author of Wooden: A Coach's Life

"Mr. Halberstam would have been the first to insist that we not confuse fiction with nonfiction, and that we not mistake biography -- the telling of a life -- for hagiography -- the burnishing of a legend. Which was football's big trouble last week, it turns out, as lots of folks who should know better took exception to a new biography of Walter Payton."
—ESPN.com, "The Sporting Life"

"I found the Walter of your book to be more of a hero than the one people refer to."
—Rick Hogan, WGN Sunday Papers

"I have read the book and I can tell you your appreciation of Walter will be heightened if you read the whole book and not just the excerpt." — Rick Kogan

"Over the weekend I read an advance copy of Sweetness and found it to be an incredible, thoughtful, deep and profound read. It’s exceptional work.  I wouldn’t let an out-of-context excerpt and some enraged condemnations get in the way of a fascinating read about a fascinating man."
—Dan Wetzel, Yahoo! Sports

"READ THE BOOK...But if you like texture, if you want to get the sense of a real life lived by a real person with real beauty within and real warts, start reading and do so with an open mind."
—The Indianapolis Star

"Pearlman did not set out to expose Payton but to understand him, to identify and define the qualities that made him so appealing. He was a football-playing hero to millions, true, but he was also a human being of considerable complexity. There’s a story in how those two sides intersected, and a skilled biographer gets to that story ... If Walter Payton, magnificent football player and Chicago treasure, is enough for you, ignore the book and cherish your memories. If Walter Payton, flawed but fascinating human being, intrigues you, read it. You might come away with a greater appreciation."
—The New York Times

"If Walter Payton, magnificent football player and Chicago treasure, is enough for you, ignore the book and cherish your memories. If Walter Payton, flawed but fascinating human being, intrigues you, read it. You might come away with a greater appreciation." -New York Times