The Art of Porco Rosso (Hardcover) 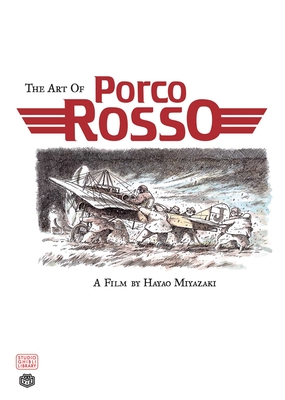 The Art of Porco Rosso (Hardcover)


Not On Our Shelves—Ships in 1-5 Days
In Early 1930's era Italy, air pirates, bounty hunters and high flyers of all sorts rule the skies. The most cunning and skilled of these pilots is Porco Rosso, a man cursed with the head of a pig after watching the spirits of the pilots killed in the last air battle he fought in rise to the heavens. He now makes a living taking jobs, such as rescuing those kidnapped by air pirates. Donald Curtis, Porco's rival in the air and in catching the affections of women, provides a constant challenge to the hero, culminating in a hilarious, action packed finale.

The Art of Porco Rosso English Version, a film by Hayao Miyazaki. Contains Original Story The Age of the Flying Boat, Full of Pride and Freedom, Ships in the Sky, Art of Art, Film Ending Illustrations.
Hayao Miyazaki is one of Japan’s most beloved animation directors. In 2005 he was awarded the Venice International Film Festival’s Golden Lion Award for Lifetime Achievement, and his Studio Ghibli received the festival’s Osella Award for overall achievement in 2004. Miyazaki’s films include Spirited Away, winner of the 2002 Academy Award® for Best Animated Feature Film, as well as Castle in the Sky, My Neighbor Totoro, Kiki's Delivery Service, Princess Mononoke, Howl's Moving Castle, and Ponyo, all of which have received great acclaim in the U.S. Miyazaki’s other achievements include the highly regarded manga series Nausicaä of the Valley of the Wind and Starting Point: 1979-1996, a collection of essays, interviews, and memoirs that chronicle his early career and the development of his theories of animation. Both are published in English by VIZ Media.