Battlefield America: The War On The American People (Paperback) 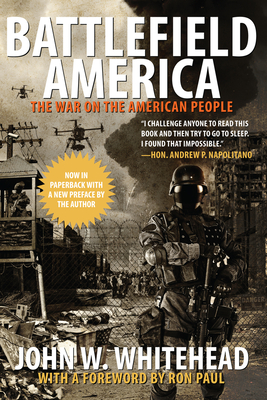 Battlefield America: The War On The American People (Paperback)


Not On Our Shelves—Ships in 1-5 Days
Police forces across the United States have been transformed into extensions of the military. Our towns and cities have become battlefields, and we the American people are now the enemy combatants to be spied on, tracked, frisked, and searched. For those who resist, the consequences can be a one-way trip to jail, or even death. Battlefield America: The War on the American People is constitutional attorney John W. Whitehead’s terrifying portrait of a nation at war with itself. In exchange for safe schools and lower crime rates, we have opened the doors to militarized police, zero tolerance policies in schools, and SWAT team raids. The insidious shift was so subtle that most of us had no idea it was happening. This follow-up to Whitehead’s award-winning A Government of Wolves is a brutal critique of an America on the verge of destroying the very freedoms that define it. Hands up!—the police state has arrived.
John W. Whitehead is an attorney and author who has written, debated, and practiced widely in the area of constitutional law and human rights. Whitehead’s concern for the persecuted and oppressed led him, in 1982, to establish The Rutherford Institute, a nonprofit civil liberties and human rights organization whose international headquarters are located in Charlottesville, Virginia. Ronald Ernest Paul (born August 20, 1935) is an American author, activist, physician, and retired politician who served as the U.S. Representative for Texas's 22nd congressional district from 1976 to 1977 and again from 1979 to 1985, and then for Texas's 14th congressional district from 1997 to 2013. On three occasions, he sought the presidency of the United States: as the Libertarian Party nominee in 1988 and as a candidate for the Republican Party in 2008 and 2012.
“The loss of personal liberty, the growth of big government, and the death of government respect for persons rarely occur overnight. It takes a fine eye and a fearless manner to discover and reveal these dangers before it is too late. No one in American today does this better than John Whitehead. In his latest magnum opus, Battlefield America: The War on the American People, he paints the case that Fascism is already here, liberty is already lost, we are in more danger from the government than from bomb throwers, and it is nearly too late for hope. I challenge anyone to read this book and then try to go to sleep. I found that impossible.” —Hon. Andrew P. Napolitano, Senior Judicial Analyst, Fox News Channel; Distinguished Visiting Professor of Law, Brooklyn Law School

“Once again, John W. Whitehead shows himself to be a thorough reporter, an insightful scholar and a tireless defender of the Constitution. Battlefield America is the most penetrating, eye-opening proof to date of the imperialist government’s desecration of our constitutional personal liberties. Battlefield America is not only a warning of the danger ahead but also a detailed, systematic illustration of how a once freedom-loving nation can descend into tyranny. A must-read for anyone concerned about how to get us back on the road to becoming a self-governing republic. Citizens, journalists, activists, government officials—any and all Americans who have so little inkling about what it really means to be an American and actively safeguard our freedoms against all dangers, foreign and domestic—should take the time to become acquainted with this book. Students and teachers, especially, should make it a priority to debate and discuss this book in their classrooms.” —Nat Hentoff, syndicated columnist and historian