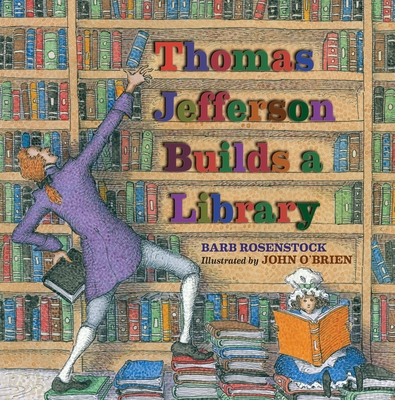 
Special Order—Subject to Availability
Young readers of all ages will love this story about President Thomas Jefferson, who found his passion as soon as he learned to read: books, books, and more books!

Before, during, and after the American Revolution, Jefferson collected thousands of books on hundreds of subjects. In fact, his massive collection eventually helped rebuild the Library of Congress—now the largest library in the world.

Author Barb Rosenstock's rhythmic words and illustrator John O'Brien's whimsical illustrations capture Jefferson's zeal for the written word as well as little-known details about book collecting. An author's note, bibliography, and source notes for quotations are also included.
Barb Rosenstock is the author of several award-winning true stories for children: Fearless: The Story of Racing Legend Louise Smith; The Littlest Mountain, a Sydney Taylor Honor Book; and The Camping Trip that Changed America, a Parents' Choice silver medal book and one of Booklist's Top 10 Books on the Environment for Youth. She lives outside Chicago with her husband and two sons. Visit her on the web at barbrosenstock.com.

John O'Brien has illustrated nearly 100 books for children, including Poof! and Look...Look Again!, which he also wrote. And for more than twenty years, he has contributed cartoons to The New Yorker. When he is not creating books or cartoons, he can be found playing the banjo or concertina or serving as senior lieutenant in the North Wildwood, New Jersey, Beach Patrol. He lives in Delran, New Jersey.
"This attractive picture book uses Thomas Jefferson's love of reading and collecting books as a lens through which to view the story of his life... an informative author's note rounds out this appealing introduction to Jefferson." —Booklist

"This unusual picture-book biography fosters a new understanding of Thomas Jefferson's life as viewed through his love of books and its impact on our burgeoning nation... sure to be enjoyed, this is an engaging study of one of our Founding Father's great legacies." —Kirkus Reviews

"It is no small feat to entertain children in a book about loving books (an increasingly croweded shelf), but this duo succeeds admirably through well-chosen facts, staggering statistics, an interactive text, and humor... this is a unique portrayal of the life and passions of the third president." —School Library Journal

"Jefferson's well-documented obsession with books--reading, recommending, lending, gifting, and collecting--gets the picture-book treatment in this chatty biography that describes the journey of Jefferson's collection from private stash to the basis of the Library of Congress. . ." —Bulletin of the Center for Children's Books