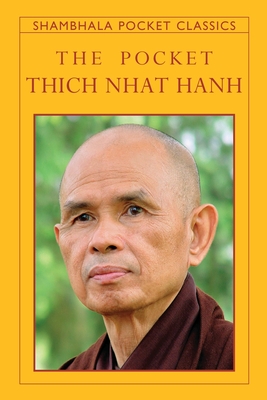 
On Our Shelves Now at:
A pocket-sized treasury of writings and teachings from the beloved Zen teacher Thich Nhat Hanh

Since Thich Nhat Hanh’s exile from his native Vietnam in 1966, the Zen Buddhist monk has gone on to become one of the most influential and beloved spiritual masters of our age. The seeming simplicity of his words belies the power of his ability to touch the heart and mind, and to inspire spiritual practice. Known for his warm, generous, and joyful teaching style, Hanh has made his wisdom remarkably accessible and resonant to readers across the globe.

Now, that wisdom has been compiled into one pocket-sized collection featuring his most powerful and inspiring teachings. Taken from his many published works, these selections make up a concise introduction to the Hanh’s major themes—such as mindfulness, enlightenment, and compassion—and distill his teachings on the transformation of individuals, relationships, and society.

The Shambhala Pocket Library is a collection of short, portable teachings from notable figures across religious traditions and classic texts. The covers in this series are rendered by Colorado artist Robert Spellman. The books in this collection distill the wisdom and heart of the work Shambhala Publications has published over 50 years into a compact format that is collectible, reader-friendly, and applicable to everyday life.
Thich Nhant Hanh is a Vietnamese Zen Buddhist monk, internationally known author, poet, scholar, and peace activist, who was nominated for the Nobel Peace Prize by Dr. Martin Luther King Jr. He is the author of numerous books, including the bestselling Peace Is Every Step and The Miracle of Mindfulness. He is the leader of monastic communities in New York, California, France, Germany, Hong Kong, and Vietnam, and his teachings inspire several hundred local groups of lay practitioners across the United States, Latin America, Europe, Africa, Asia, and Oceania.