You Are Here: Discovering the Magic of the Present Moment (Paperback) 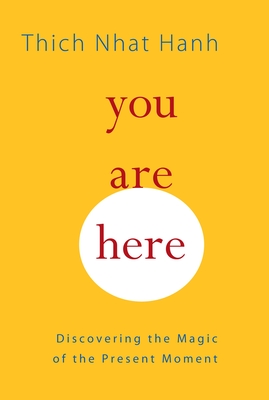 You Are Here: Discovering the Magic of the Present Moment (Paperback)


On Our Shelves Now at:
Cut through the busyness and anxieties of daily life to discover the simple happiness of living in the present moment, as taught by a world-renowned Zen monk

In this book, Thich Nhat Hanh—Zen monk, author, and meditation master—distills the essence of Buddhist thought and practice, emphasizing the power of mindfulness to transform our lives. But true mindfulness, Hanh explains, is not an escape. It is being in the present moment, totally alive and free.

Based on a retreat that Thich Nhat Hanh led for Westerners, You Are Here offers a range of effective practices for cultivating mindfulness and staying in the present moment—including awareness of breathing and walking, deep listening, and skillful speech. These teachings will empower you to witness the wonder of life and transform your suffering, both within and outside you, into compassion, tenderness, and peace. As Thich Nhat Hanh declares, “the energy of mindfulness is the energy of the Buddha, and it can be produced by anybody.” It is as simple as breathing in and breathing out.
A Vietnamese Zen Buddhist monk, Thich Nhat Hanh is an internationally known author, poet, scholar, and peace activist, and was nominated for the Nobel Peace Prize by Martin Luther King Jr. He is the author of numerous books, including the best-selling Living Buddha, Living Christ; Anger: Wisdom for Cooling the Flames; Peace Is Every Step; and The Miracle of Mindfulness. He founded monastic communities in France, Vermont, and California and teaches actively around the world. He passed away at the age of 95 in January 2022.
“Thich Nhat Hanh shows us the connection between personal inner peace and peace on earth.”—His Holiness the Dalai Lama

“Thich Nhat Hanh writes with the voice of the Buddha.”—Sogyal Rinpoche, author of The Tibetan Book of Living and Dying