The Broken Road: From the Iron Gates to Mount Athos (NYRB Classics) (Paperback) 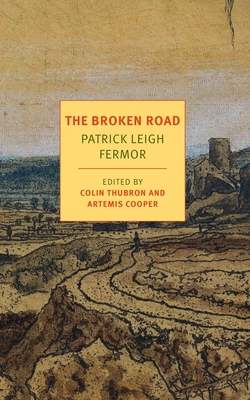 The Broken Road: From the Iron Gates to Mount Athos (NYRB Classics) (Paperback)


In Stock—Click for Locations
Patrick Leigh Fermor recounts the last leg of his epic walk across Europe as he makes his way through Bulgaria, Romania, and finally Greece.

In the winter of 1933, eighteen-year-old Patrick (“Paddy”) Leigh Fermor set out on a walk across Europe, starting in Holland and ending in Constantinople. Decades later, Leigh Fermor told the story of that life-changing journey in A Time of Gifts and Between the Woods and the Water, works now celebrated as among the most vivid, absorbing, and beautifully written travel books of all time.

The Broken Road is the account of the final leg of his journey, catching up with Paddy in the fall of 1934, following him through Bulgaria and Romania and ending in Greece. Days and nights on the road, spectacular landscapes and uncanny cities, friendships lost and found, leading the high life in Bucharest or camping out with fishermen and shepherds—such incidents and escapades are described with all the linguistic bravura and astonishing learning that Leigh Fermor is famous for, but also with a melancholy awareness of the passage of time. Throughout it we can hear the still-ringing voice of an irrepressible young man embarking on a life of adventure.
Patrick Leigh Fermor (1915–2011) was an intrepid traveler and a heroic soldier who is widely considered to be one of the finest travel writers of the twentieth century. After his stormy school days, followed by the walk across Europe to Constantinople that begins in A Time of Gifts (1977) and continues through Between the Woods and the Water (1986)  and The Broken Road (published posthumously in 2013), he  lived and traveled in the Balkans and the Greek archipelago.  His books Mani (1958) and Roumeli (1966) attest to his deep interest in languages and remote places. During the Second World War he joined the Irish Guards, became a liaison officer in Albania, and fought in Greece and Crete. He was awarded the DSO and OBE. Leigh Fermor lived partly in Greece—in the house he designed with his wife, Joan, in an olive grove in the Mani—and partly in Worcestershire. In 2004 he was knighted for his services to literature and to British–Greek relations.

Colin Thubron is the president of the Royal Society of Literature. Among his books are The Lost Heart of Asia, Shadow of the Silk Road, and most recently, To a Mountain in Tibet.

Artemis Cooper is the author of the biography Patrick Leigh Fermor: An Adventure as well as the editor of Words of Mercury, a collection of Leigh Fermor's writings. She has written several works of history, including Cairo in the War.
“An unforgettable book, full of strange encounters with a prewar Balkan cast of counts, prostitutes, peasants, priests and castrati. The greatest pleasure of all, as usual, is Leigh Fermor’s own infectious, Rabelaisian hunger for knowledge of almost every kind. His memory seems eidetic; his eyes miss nothing. He seems to carry within himself a whole troupe of sharp-eyed geographers, art historians, ethnologists and multilingual poets.” —Robert F. Worth, The New York Times Book Review

“When you put down The Broken Road you feel what [Leigh Fermor] himself felt on departing from Mount Athos…‘a great deal of regret.’” —Daniel Mendelsohn, The New York Review of Books

"By any standards, this is a major work. It confirms that Leigh Fermor was, along with Robert Byron, the greatest travel writer of his generation, and this final volume assures the place of the trilogy as one of the masterpieces of the genre, indeed one of the masterworks of  postwar English non-fiction." —William Dalrymple, The Guardian

“The descriptions of waking in unfamiliar places are so seductive that even the most home-hugging reader will long to wake somewhere unknown. And some of the evocations of landscapes and views will live long in the memory.” —Anthony Sattin, The Observer

“In the end, it’s his moments of joy, his revelling in a young man’s moments of epiphany, which stay in the mind.” —Neal Ascherson, London Review of Books

"The Broken Road is superb, towering about the usual run of travel books....The Broken Road is better than any gleaming capstone: while giving us a more than satisfactory idea of Leigh Fermor's Balkan adventures, it also, in its raggedness, accentuates the seamless magic of the books that came before, and it wraps the whole enterprise in a pathos that humanizes his superhuman gifts." —Ben Downing, The Times Literary Supplement

"In a lamplit frenzy of mystic dance and song, among Homeric fisherfolk and swains, young Paddy discovers the underground ecstasies of rebetika in all its 'quintessence of fatalism.' Glimpsed from the future, he sets a course for the Greece that would keep his prose dancing ever after." --The Independent

“The now-complete trilogy documenting his journey is essential curriculum for any traveler….Fermor’s youthful forays across Bulgaria and Romania to the coast of the Black Sea make the reader wish all of life were one long journey of slow mornings on Turkish divans, welcome platters of raki and Turkish delight, crackling firelight and long conversations in various languages…Even those who have never seen the Danube will be struck with nostalgia—not for the author’s memories, but for their own, encapsulated in that same crystal mien of idealized youth…” —Longitude

"A fitting epilogue to 20th-century travel-writing and essential reading for devotees of Sir Patrick’s other works." --The Economist

"How fitting, for a man so young at heart, with such a boundless appetite for life, that his last published words should be those of a wide-eyed 20-year-old, embarking on what will be a lifelong love affair with Greece. His editors, Colin Thubron and Artemis Cooper, have put this book to bed with skill and sensitivity. Friends and fans, acolytes, devotees and disciples can all rest easy. It was worth the wait." --Justin Marozzi, The Spectator

“A unique mixture of hero, historian, traveler and writer; the last and the greatest of a generation whose like we won't see again.”–Geographical

“The finest traveling companion we could ever have . . . His head is stocked with enough cultural lore and poetic fancy to make every league an adventure.” –Evening Standard

If all Europe were laid waste tomorrow, one might do worse than attempt to recreate it, or at least to preserve some sense of historical splendor and variety, by immersing oneself in the travel books of Patrick Leigh Fermor.”—Ben Downing, The Paris Review

Praise for A Time of Gifts and Between the Woods and the Water, the first two volume in the trilogy:

"This is a glorious feast, the account of a walk in 1934 from the Hook of Holland to what was then Constantinople. The 18-year-old Fermor began by sleeping in barns but, after meeting some landowners early on, got occasional introductions to castles. So he experienced life from both sides, and with all the senses, absorbing everything: flora and fauna, art and architecture, geography, clothing, music, foods, religions, languages. Writing the book decades after the fact, in a baroque style that is always rigorous, never flowery, he was able to inject historical depth while still retaining the feeling of boyish enthusiasm and boundless curiosity. This is the first of a still uncompleted trilogy; the second volume, Between the Woods and the Water, takes him through Hungary and Romania; together they capture better than any books I know the remedial, intoxicating joy of travel." — Thomas Swick, South Florida Sun-Sentinel

“Recovers the innocence and the excitement of youth, when everything was possible and the world seemed luminescent with promise. ...Even more magical...through Hungary, its lost province of Transylvania, and into Romania... sampling the tail end of a languid, urbane and anglophile way of life that would soon be swept away forever.” —Jeremy Lewis, Literary Review

“A book so good you resent finishing it.” —Norman Stone

"The greatest of living travel writers…an amazingly complex and subtle evocation of a place that is no more." — Jan Morris

"In these two volumes of extraordinary lyrical beauty and discursive, staggering erudition, Leigh Fermor recounted his first great excursion… They’re partially about an older author’s encounter with his young self, but they’re mostly an evocation of a lost Mitteleuropa of wild horses and dark forests, of ancient synagogues and vivacious Jewish coffeehouses, of Hussars and Uhlans, and of high-spirited and deeply eccentric patricians with vast libraries (such as the Transylvanian count who was a famous entomologist specializing in Far Eastern moths and who spoke perfect English, though with a heavy Scottish accent, thanks to his Highland nanny). These books amply display Leigh Fermor’s keen eye and preternatural ear for languages, but what sets them apart, besides the utterly engaging persona of their narrator, is his historical imagination and intricate sense of historical linkage…Few writers are as alive to the persistence of the past (he’s ever alert to the historical forces that account for the shifts in custom, language, architecture, and costume that he discerns), and I’ve read none who are so sensitive to the layers of invasion that define the part of Europe he depicts here. The unusual vantage point of these books lends them great poignancy, for we and the author know what the youthful Leigh Fermor cannot: that the war will tear the scenery and shatter the buildings he evokes; that German and Soviet occupation will uproot the beguiling world of those Tolstoyan nobles; and that in fact very few people who became his friends on this marvelous and sunny journey will survive the coming catastrophe." — Benjamin Schwarz, The Atlantic


"Those for whom Paddy’s prose is still an undiscovered country are to be envied for what lies ahead-hours with one of the most buoyant and curious personalities one can find in English." — The New York Sun

"Mr. Fermor…is a peerless companion, unbound by timetable or convention, relentless in his high spirits and curiosity." — Richard B. Woodward, The New York Times

"We are aware at every step that his adventure can never be duplicated: only this extraordinary person at this pivotal time could have experienced and recorded many of these sights. Distant lightening from events in Germany weirdly illuminates the trail of this free spirit." — The New York Times

"The young Fermor appears to have been as delightful a traveling companion as the much older Fermor a raconteur." — The Houston Chronicle

"[A Time of Gifts, Between the Woods and the Water] are absolutely delightful volumes, both for those who want to better understand what was lost in the violence of Europe’s 20th-century divisions and for those who appreciate the beauty and thrill of travel writing at its best." — The Houston Chronicle

"Leigh Fermor is recognizably that figure many writers of the past century have yearned to be, the man of action." — The Guardian

"He was, and remains, an Englishman, with so much living to his credit that the lives conducted by the rest of us seem barely sentient-pinched and paltry things, laughably provincial in their scope, and no more fruitful than sleepwalks. We fret about our kids’ S.A.T. scores, whereas this man, when he was barely more than a kid himself, shouldered a rucksack and walked from Rotterdam to Istanbul." — Anthony Lane, The New Yorker

“Even more magical...through Hungary, its lost province of Transylvania, and into Romania...sampling the tail end of a languid, urbane and anglophile way of life that would soon be swept away forever.” —Jeremy Lewis, Literary Review