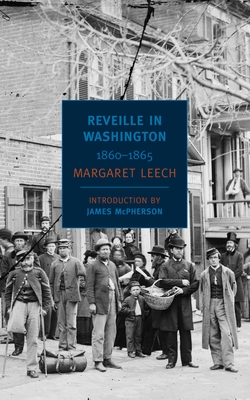 A vibrant portrait of Civil War-era Washington, D.C. that is “packed and running over with the anecdotes, scandals, personalities, and tragi-comedies of the day” (The New Yorker)

1860: The American capital is sprawling, fractured, squalid, colored by patriotism and treason, and deeply divided along the political lines that will soon embroil the nation in bloody conflict. Chaotic and corrupt, the young city is populated by bellicose congressmen, Confederate conspirators, and enterprising prostitutes. Soldiers of a volunteer army swing from the dome of the Capitol, assassins stalk the avenues, and Abraham Lincoln struggles to justify his presidency as the Union heads to war.

Reveille in Washington focuses on the everyday politics and preoccupations of Washington during the Civil War. From the stench of corpse-littered streets to the plunging lace on Mary Lincoln’s evening gowns, Margaret Leech illuminates the city and its familiar figures—among them Abraham Lincoln, Jefferson Davis, Robert E. Lee, William Seward, and Mary Surratt—in intimate and fascinating detail.

Leech’s book remains widely recognized as both an impressive feat of scholarship and an uncommonly engrossing work of history.
Margaret Leech (1893–1974) was an American historian, novelist and dramatist. She twice received the Pulitzer Prize in history, for Reveille in Washington (1942) and In the Days of McKinley (1960); with the former she became the first woman to receive a Pulitzer in that category.

James McPherson was awarded the Pulitzer Prize in 1989 for Battle Cry of Freedom: The Civil War Era. His other bestselling books include For Cause and Comrades, Drawn with the Sword, What They Fought For; Gettysburg; and Fields of Fury. A professor at Princeton University, he lives in Princeton, New Jersey.
“This teeming Washington, described in all its wonderful, eccentric detail, provides the perspective from which Leech examines the overall pursuit of the war, among whose elements were the ineptness, intransigence, and obstructive jealousies of many of the Union generals…. This is a character-driven history and a chronicle of a city, but it is, also, a deft review of military strategy and of political maneuvering between and within political parties.  It is, too, a fast-paced account of the developing exigencies that resulted in, among other things, the suspension of habeas corpus, the levying of income tax, conscription, and, most momentously, in the emancipation of slaves, first in Washington and then universally. "—Katherine Powers, B&N Review

“In 1860, Washington was a raw country town, a symbol trying to be a city. By 1865 it had become the nation’s capital. Reveille in Washington is packed and running over with the anecdotes, scandals, personalities, and tragi-comedies of the day. Here you will meet young Andy Carnegie organizing military transport; a Patent Office clerk named Clara Barton suddenly discovering she has a real vocation; Matthew Brady, obsessed with the idea that he could make a photographic record of a war; Louisa M. Alcott and Walt Whitman finding their great moments in hospitals. It’s a wonderful story.”
—Clifton Fadiman, The New Yorker

“Published in 1941, this remains the best single popular account of Washington during the great convulsion of the civil War. Vividly written, with hundreds of cameo portraits, from president Lincoln to the humblest citizen.” —The Washington Post

"Leech, who published three novels before this work of history appeared in 1941, offers a smart and witty account of wartime Washington’s transformation from an administrative backwater to the locus of renewed federal power. This encyclopedic portrait won Leech, who died in 1974, her first of two Pulitzer Prizes for history...Reveille in Washington could stand on its own as a first-rate chronicle of how the political elites handled the war. Many of Leech’s characters are familiar names from American history, and they are brought to life in a new way with the spark of her pen...But the book’s main character is really the city itself...Several writers—Walt Whitman in Specimen Days, Louisa May Alcott in Hospital Sketches—wrote more intimately and movingly about life in the capital during the Civil War, but neither did so with the scope or the ambition of Leech. The steady clip of Leech’s accomplished book is in a way perfectly suited to Washington." -- The New Republic

“Winner of the 1942 Pulitzer Prize, this history of the nation’s capital during the Civil War is a rich, beautifully written narrative.” —“Ten Neglected Classics,” The American Scholar