My Hollywood and Other Poems (Paperback) 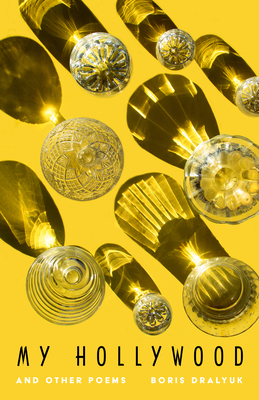 My Hollywood and Other Poems (Paperback)


On Our Shelves Now at:
"The wit and daring of his rhymes and phrasing remind me of that old master, Donald Justice, who dazzled us with the elegance of his forms. Dralyuk carries this high style into the 21st century, and I, for one, am thrilled to be in the presence of his marvelous verbal art. Pay attention, readers: a new maestro is in our midst."--Ilya Kaminsky, author of Deaf Republic and Dancing in Odessa "These poems] are the souvenirs of an almost-vanished glamour, an ethnic, gritty, free-wheeling city, little fantasias encased in rhyme and meter."--Jesse Nathan, McSweeney's

My Hollywood and Other Poems is a collection of lyric meditations on the experience of migr's in Los Angeles. In forms ranging from ballades to villanelles to Onegin sonnets, the poems pursue the sublime in a tarnished landscape, seek continuity and mourn its loss in a town where change is the only constant. My Hollywood draws on the poet's own life as a Jewish immigrant from the Soviet Union, honors the vanishing traces of the city's past, and, in crisp and poignant translations, summons the voices of five Russian poets who spent their final years in LA, including the composer Vernon Duke.

"Dralyuk embraces rhyme with a rare and admirable enthusiasm for sound and syllable, for musical variety and plays on words . . . An] air of upbeat sorrow permeates My Hollywood. It's an migr mood, defined by the conviction that things could always be worse."--New York Review of Books

"Byronic rhymes are poetry's answer to special effects, and Dralyuk's skill at slipping them in--so that the art seems artless--is worthy of Industrial Light & Magic . . . What's true of my favorite films is true of this book: the lines are first-rate, but it's the images that linger."-- Austin Allen, The Hopkins Review

"My Hollywood is a first-rate collection of precise, delightfully graceful poems, the poet as Fred Astaire tap-dancing up and down the lines."--Russian Life
Boris Dralyuk is the Editor in Chief of the Los Angeles Review of Books. His poems have appeared or are forthcoming in The New York Review of Books, The Hopkins Review, The New Criterion, The Yale Review, First Things, Subtropics, The Georgia Review, and elsewhere. He is co-editor (with Robert Chandler and Irina Mashinski) of The Penguin Book of Russian Poetry, editor of 1917: Stories and Poems from the Russian Revolution and Ten Poems from Russia, and translator of Isaac Babel, Mikhail Zoshchenko, and other authors. He lives in Los Angeles. My Hollywood is his debut poetry collection.